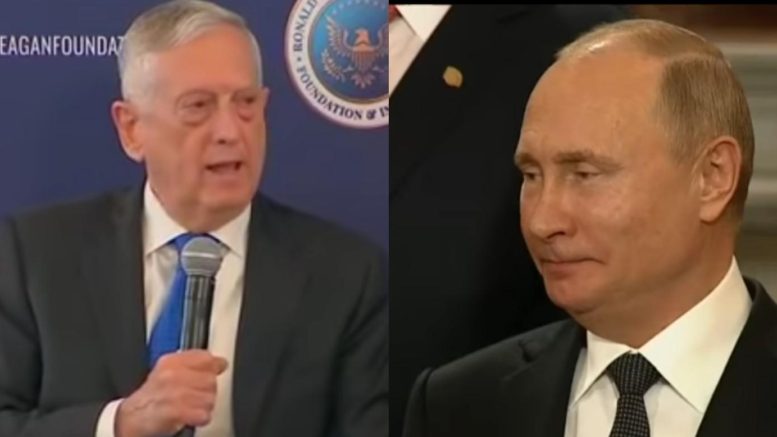 Mattis speaks out on Putin and Russia. Photo credit to The Freedom Times compilation with screen shots.

It’s been a busy week at the G20 2018 meeting in Buenes Aires, Argentina. With 28 world leaders attending, Putin and Trump were two of them.

They were to have a meeting;however, Trump cancelled it. General Mattis spoke on the relationship between Russia and the United States. Specifically, about the Midterms. (MORE BELOW.)

Russia says one thing and does another.

General “Mad Dog” Mattis, joined Fox News’ Bret Baier on stage at the Ronald Reagan Presidential Library on Saturday and he talked truth about some of the reasons Trump cancelled the meeting with Putin at the G20.

Mattis said, “There is no doubt the relationship has worsened. He tried again to muck around our elections this last month and we’re seeing a continued effort along those lines.”

“So Russia doesn’t speak with one voice. We find that Russia, on the surface tries to make certain very deceitful statements stick. They don’t stick. Their actions speak louder than words. And it has worsened the relationship,” Mattis explained patiently to the Baier.

Bret then asked, “has the threat increased significantly?” Mattis inhales deeply settles back in his chair and lifts the microphone and said, “I don’t know that the threat has increased. It’s continued efforts to try to subvert democratic processes that must be defended.” (MORE BELOW.)

The Hill reported, “Mattis said the Trump administration and other NATO allies have pressed Russia repeatedly on un-democratic actions, but to no avail.”

“This is a very complex situation because clearly Mr. Putin is a slow learner. He is not recognizing that what he is doing is actually creating the animosity against his people,” per The Hill.

”We’re dealing with someone we simply cannot trust,” The Hill reported Mattis saying about Putin. Click here to see video.

Pres Trump Reacts As Nadler Prepares To Subpoena The Mueller Report: ‘Behind Closed Doors The Dems Are Laughing’