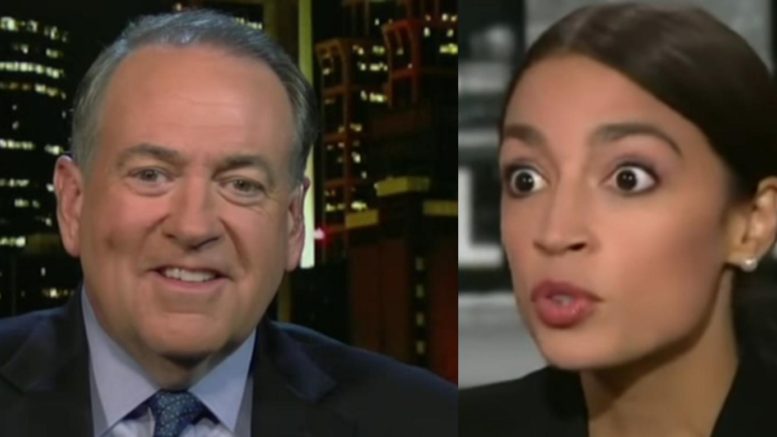 Former Governor, Mike Huckabee may very well have perfected the art of marrying humor with politics.

In what can only be described as a brilliant tweet, about the arrival of socialista Ocasio-Cortez (D-NY) to the D.C scene! (MORE BELOW.)

Since her win in New York where “Ocasio-Cortez won the Democratic primary in New York’s 14th congressional district covering parts of the Bronx and Queens in New York City,” she has made freshman gaffes and statements that leave much of America and D.C. scratching their heads.

In her latest foible regarding her November 6th win, the Daily Mail quoted her and she said, “We’ve done what we thought was impossible. We went to the moon, we electrified the nation. We established civil rights. We enfranchised the country. We dig deep, and we did it. We did it when no one else thought that we could.”

Then she compared her win to the previous HISTORIC American accomplishments, she said, “That’s what we did when so many of us won an election this year,” wait….WHAT? Her winning an election is like going to the MOON? (MORE BELOW.)

In an epic throw-down tweet — Huckabee made the point that YOUR VOTE MATTERS.

Huckabee tweeted, “Ocasio-Cortez compares her election to moon landing. Huh? Big difference. Moon landing was LUNAR, not LOONEY; Moon landing done by ppl who knew what they were doing…those who elected someone who thought there were 3 branches of Congress did NOT.”

If you ever thought your vote doesn’t count. Take these numbers into consideration and how Cortez made her looney ascent to D.C.

The Daily Mail reported, in the “area of the Bronx and Queens that’s home to 214,750 active registered Democratic voters, only 27,744 cast ballots in the primary. The district’s U.S. Census-estimated population in 2016 was 691,715. Fewer than 16,000 voted for Ocasio-Cortez.” Don’t let another LOONEY Socialista into D.C….VOTE! Those numbers PROVE your VOTE matters!

Leo 2.0 Slams AOC For Trying ‘To Attach Everything To White Supremacy Or Race’: “I’m Sick Of It!”