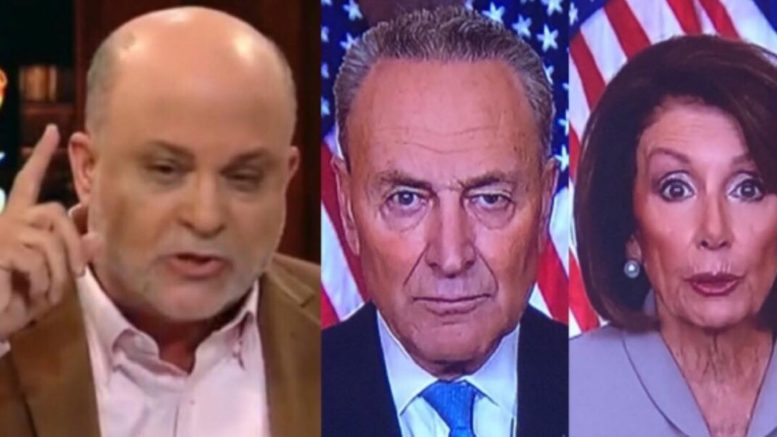 Host of the syndicated radio show “The Mark Levin Show,” as well as “Life, Liberty & Levin” on Fox News, Mark Levin, the “great one” joined host Sean Hannity on Fox News Tuesday night after President Trump addressed the nation from the Oval Office on border security.

Levin tore into Chuck Schumer (D-NY) and Nancy Pelosi (D-CA) where he called them “pathological liars.” (Video Below)

During the segment with Hannity on Tuesday night, Mark Levin pushed back at Schumer and Pelosi pointing out how they have done nothing constructive for immigration or border control policy in nearly half a century.

He praised President Trump after his Oval Office address to the nation declaring that he gave an outstanding speech on the importance of the wall and solid border security policy. However, he said Schumer and Pelosi did the opposite.

Levin noted that Schumer and Pelosi have been in Congress for decades with little accomplishment to show for themselves.

According to Fox News, Schumer began his term on Capitol Hill as a congressman in 1981, and later the Senate after defeating popular Republican Sen. Alfonse “Al” D’Amato in 1998. Schumer’s House seat was filled by his then-longtime aide, Anthony Weiner. Pelosi was first elected in 1987 as the endorsed successor of Rep. Sala Burton (D-Calif.). (Video Below)

Levin also pointed out that Schumer and Pelosi, along with their caucus, successfully “fooled” every Republican President from Ronald Reagan through George W. Bush.

“[Schumer and Pelosi] are part of the scam artists. They get amnesty, legalization, citizenship and never secure the border,” Levin expressed.

“They’re not going to fool Donald Trump,” he announced. (Video Below)