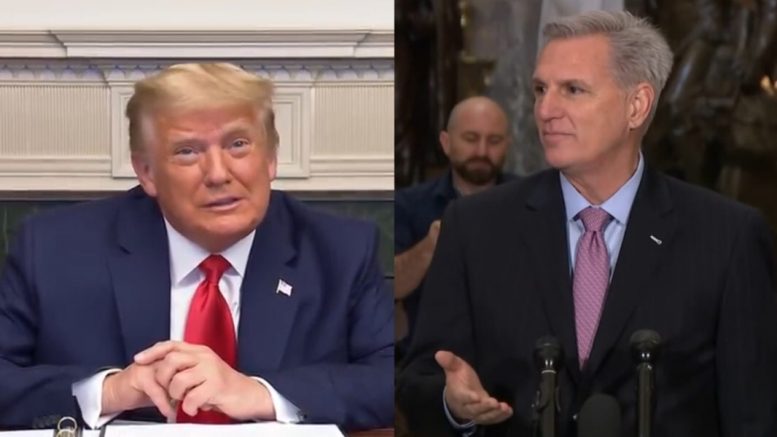 House Speaker Kevin McCarthy (R-CA) indicated to a reporter that he would consider expunging one or both of 45th President Donald J. Trump’s impeachment votes against him.

“I would understand why members would want to bring that forward,” McCarthy said in response to a question at a press conference on Thursday. “But I understand why individuals want to do it, and we’d look at it”.

In the last Congress, a group of more than 30 House Republicans led by Rep. Markwayne Mullin (OK) put forward a resolution to expunge Trump’s impeachment in the wake of the Jan. 6, 2021 protest at the Capitol.

A smaller group, again led by Mullin, also introduced a resolution to expunge Trump’s December 2019 impeachment for allegedly attempting to withhold military aid from Ukraine in an effort to pressure the country to investigate the business dealings of President Biden’s son Hunter Biden, Julia Shapero at The Hill reported.

In December 2019, McCarthy told Fox News ahead of the vote that “a future congress would even expunge this vote, because it is the thinnest, fastest, weakest impeachment in American history,” adding, “[Pelosi] admits for the last two and half years, she has been trying to impeach this president. Remember where this impeachment came from: Adam Schiff.”

Sen. Graham Warns McConnell Over His Rhetoric Against Trump: “He Is Giving Some Legitimacy To This Impeachment Process”