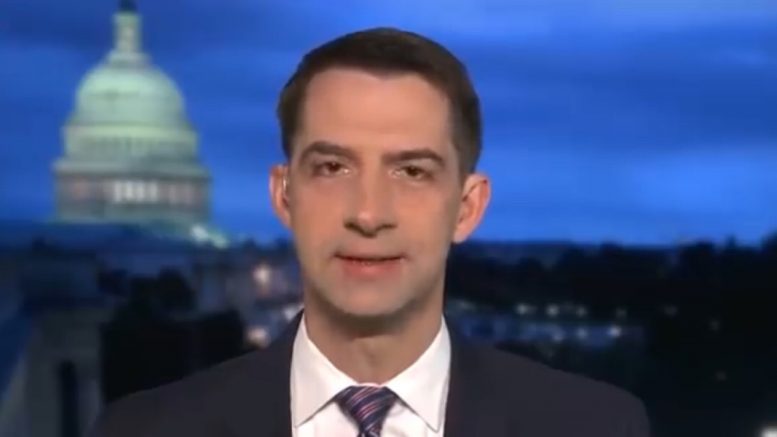 Senator Tom Cotton (R-AR) on Monday told “Fox and Friends” that the Biden administration is admitting that the immigration situation at the nation’s southern border is a “disaster” by its decision to deploy the Federal Emergency Management Agency (FEMA) to help process the increasing number of unaccompanied migrant children entering border custody amid reports of overcrowding in holding facilities.

As reported by CBS News:

Nearly 9,500 unaccompanied minors, most of them from Central America, entered U.S. border custody in February — a 21-month high. More than 7,000 of them were transferred to the U.S. refugee agency, which has been struggling to find enough bed space in its network of shelters. The shelters had previously been operating at reduced capacity because of social distancing measures put in place due to the coronavirus pandemic.

The dwindling bed space at U.S. refugee agency shelters has created a massive backlog of minors in Border Patrol holding facilities, most of which were built to briefly detain adult migrants, not children. The number of children held in Border Patrol custody this week has averaged more than 3,000.

On Friday, CBS News reported that children detained at a Customs and Border Protection (CBP) holding facility in south Texas told lawyers they were being held in overcrowded conditions. The children also reported having to sleep on the floor, not being able to call family members, having limited access to showers and not seeing sunlight in nearly a week. Continued Below

Senator Tom Cotton on Monday said, “What [the Biden administration] inherited from the Trump administration was a border that was closed. We were building a wall, and we were turning away all migrants who had no right to cross into our country.”

“The Biden border crisis though, was created by Joe Biden’s promises of amnesty and open borders and free healthcare for illegals during the campaign. That’s why border crossings have increased every month since the election,” he explained.

“And now, the Biden administration is sending FEMA to border. They are by their own declaration admitting it’s a disaster. That’s what it is when you deploy FEMA, a disaster,” the Arkansas Senator pointed out. Video Below

“But remember, they’re not deploying FEMA to secure the border, to try to finish the wall or to stop those migrants from crossing, they’re deploying FEMA to expedite them– to wave them in even faster, give them a bus ticket, give them a place ticket, and send them wherever they want to go in the United States. That is the Biden border crisis,” Senator Cotton added.

By sending FEMA to the border, President Biden is admitting that his immigration policies have caused a disaster.

But that wont stop the flow of illegal immigrants into our country—FEMA will help them get in faster. pic.twitter.com/mLVRmvQ2cP

Meanwhile on Monday, White House press secretary Jen Psaki tried to deflect the situation at the border by telling Fox News’ Peter Doocy “the fun of labels” is essentially not relevant.

Fauci On Domestic Air Travel: “Anything That Could Get People More Vaccinated Would Be Welcome”