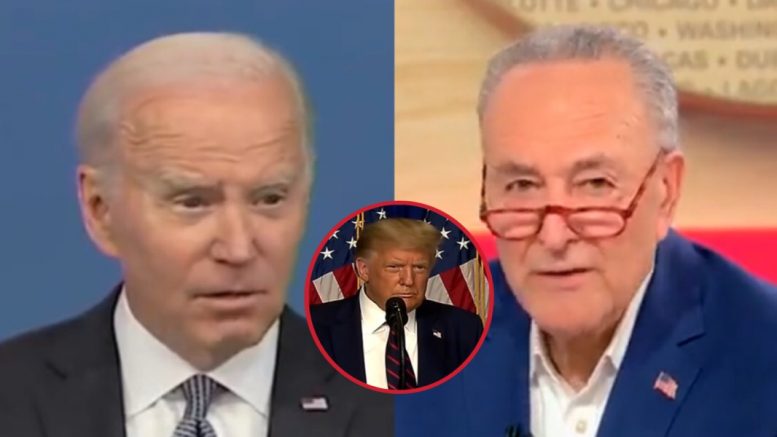 Senate Majority Leader Chuck Schumer (D-NY) reacted during “CNN This Morning” over the classified documents of Joe Biden versus those of 45th President Donald Trump.

A special counsel is investigating the president’s possible mishandling of classified information following reports that his lawyers found ten documents with classification markings inside Biden’s private University of Pennsylvania Office in November. Biden’s personal counsel informed the Department of Justice (DOJ) on Dec. 20 that a second batch of classified documents was found in the garage of the president’s home in Wilmington, Delaware, Nicole Silverio at the Daily Caller reports.

“This is our report: according to one justice official, said that ‘the White House public statements earlier this week offered an incomplete narrative about the classified documents from Biden’s time as vice president reinforced the need for a special counsel. The misleading statements created the impression that Biden’s team had something to hide,” Don Lemon read aloud to Senator Schumer.

“That doesn’t sound that much different than the former president,” Lemon told the New York Democrat lawmaker.

“Bottom line is I said that night ‘It’s premature to comment on what should be done … for President Trump'”, Schumer said.

LEMON: "Misleading statements created…impression…Biden's team had something to hide…Doesn't sound that much different than the former President.

SEN. SCHUMER: "Let's see what they have to say."

LEMON: "You seem much more measured about THIS than with the Trump Documents." pic.twitter.com/hU00kC97HC

Biden told reporters Tuesday that he was “surprised” to learn that he possessed classified material inside his private residence and office, and claimed that he is fully cooperating with the DOJ.

The 80-year-old career politician, however, claimed during a “60 Minutes” interview last year that it is “irresponsible” President Trump had classified documents at Mar-a-Lago.

Biden on 60 Minutes in September reacting to classified documents being found at Mar-a-Lago:

"How does that happen? How could anyone be that irresponsible." https://t.co/ps6kLurHa3 pic.twitter.com/WiiYBGPOFM