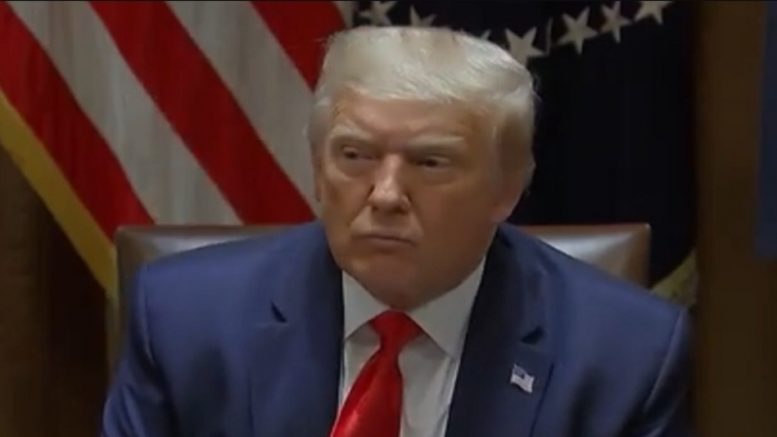 “The Wisconsin Supreme Court barred absentee-ballot drop boxes outside election offices, handing a victory to conservatives who sought to roll back the option after many voters chose absentee voting during 2020 pandemic-era elections,” The Wall Street Journal reported. “In a 4-3 ruling issued Friday, the court’s majority said that under state laws, an absentee ballot must be returned by mail or the voter must personally deliver it to the local election office.”

The court’s 4-3 ruling has critical implications in the 2024 presidential race, in which Wisconsin will again be among a handful of battleground states. President Joe Biden defeated Donald Trump in 2020 by just under 21,000 votes, four years after Trump narrowly won the state by a similar margin.

The popularity of absentee voting exploded during the pandemic in 2020, with more than 40% of all voters casting mail ballots, a record high. At least 500 drop boxes were set up in more than 430 communities for the election that year, including more than a dozen each in Madison and Milwaukee — the state’s two most heavily Democratic cities.

“The Wisconsin Supreme Court has just declared the ‘Unlock’ Boxes, or Ballot ‘Stuffing’ Boxes, to be ILLEGAL. Everybody knows what went on with the $417,000,000 that little Mark Zuckerberg ‘INVESTED’ in the corrupt 2020 Presidential Election, and that doesn’t even include the big Wisconsin Nursing Home Scandal where close to 100% of the residents voted (always is MUCH lower number). It’s now up to Robin Vos to do what everybody knows must be done. We need FAIR and HONEST Elections in our Country.

“Other States are looking at, and studying, the amazing Wisconsin Supreme Court decision declaring Ballot Boxes ILLEGAL, and that decision includes the 2020 Presidential Election. Speaker Robin Vos has a decision to make! Does Wisconsin RECLAIM the Electors, turn over the Election to the actual winner (by a lot!), or sit back and do nothing as our Country continues to go to HELL? Brave American Patriots already have a Resolution on the Floor!” See Below 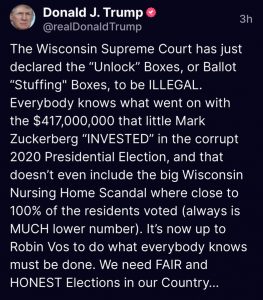 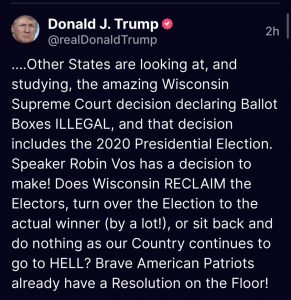