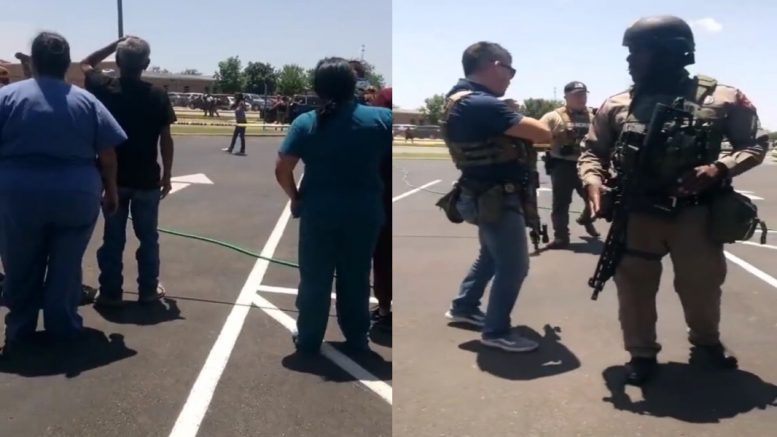 After it was revealed on Thursday that not only did police delay their response to sending tactical teams into the Robb Elementary School in Uvalde, Texas amid a school shooting that left 19 children and two teachers dead but prevented parents from entering, the Wall Street Journal reported that one mother sprinted into the school to get her children, over objections from law enforcement, Libby Emmons at The Post Millennial noted.

Angeli Rose Gomez drove 40 miles to the school upon hearing of the shooting, and she arrived, said “The police were doing nothing. They were just standing outside the fence. They weren’t going in there or running anywhere.”

Gomez said that she was only one of several parents at the school demanding that officers stop waiting around and go into the school. It was then that “federal marshals approached her and put her in handcuffs,” the Wall Street Journal reported.

The marshals told her she was being arrested for “intervening in an active investigation.” Gomez was able to convince local law enforcement to free her, but said she also saw a father pepper-sprayed, and another tackled and thrown to the ground by law enforcement as he tried to go to the school. His 10-year-old daughter was massacred in the slaughter.

Once freed, Gomez moved away from the crowd, broke into a run, jumped a fence, and ran inside to rescue her children. “She sprinted out of the school with them,” per the Journal.

The shooter had 40 minutes to an hour before law enforcement went in to neutralize him. He was eventually shot and killed by a border patrol agent who also sustained injuries.

This video make so much more sense now. The cops literally stopped parents from helping their kids. pic.twitter.com/zhQfUjlpjd https://t.co/DqgZUH3uCC

On Thursday, Fox News’ Jesse Watters analyzed the police response to the Texas school shooting and said in part, “We have a lot more questions than answers” and also suspected that we are not being told the whole story.