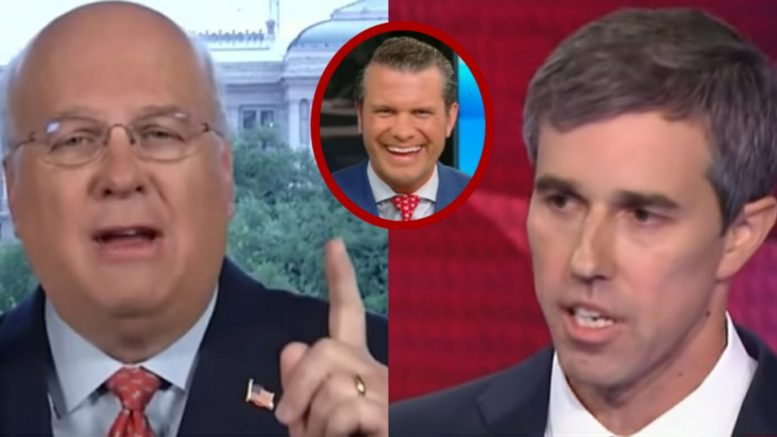 On Monday, Karl Rove ripped Beto O’Rourke over a “cheap shot” he took at Texas Governor Greg Abbott over his decision to reopen the state in wake of the COVID-19 pandemic.

In response to Beto’s jab at Gov. Abbott, Rove said, “At first, I was a little confused. I thought he might be tweeting out his own personal motto.”

Then after comparing Texas’s progress battling the coronavirus to that of Pennsylvania, Rove said, “Governor Abbott is right. We’re treating it safe, smart and strong amd I thought it was a cheap shot by Robert Francis O’Rourke to take after the governor.”

He continued, “In Mr. O’Rourke’s own message, he said ‘Stay home if you can and wear a mask.’ Well guess what? That’s exactly the message of our governor. If you don’t need to go out, stay at home. And whenever you go out, when you go to work, when you go to the store, whenever you move around the community, wear a mask and maintain social distancing.”

“But you know, Mr. O’Rourke lost a race for the Senate, he just devastated himself in a race for the United States presidency. My sense is he’s getting ready to run for governor in a couple yeara,” Rove declared. “So, he’s taking cheap shots whenever and wherever he can.”

“I’d say be safe, smart and strong and stop saying dangerous, dumb and weak things,” he concluded. Video Below

George P. Bush Issues A Stern Reaction To Rumors Of Protestors Targeting The Alamo: “Don’t Mess With The Alamo”