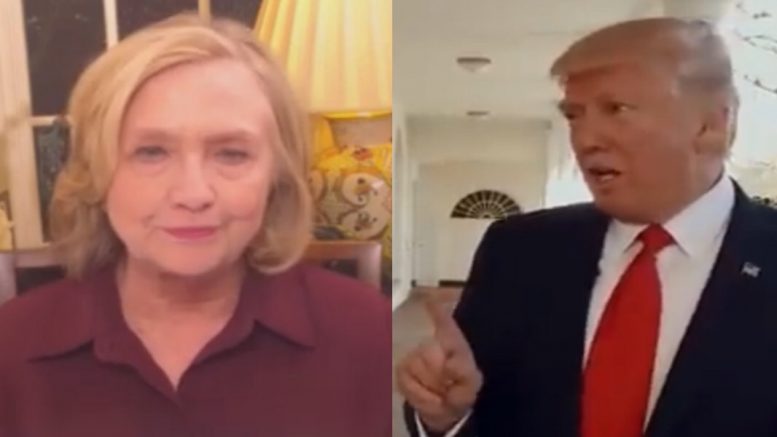 45th President Donald J. Trump issued an email statement on Wednesday, reacting to the Federal Election Commission fining the DNC and the Clinton Campaign for “violating the law”.

The Federal Election Commission has fined the Democratic National Committee and Hillary Clinton’s 2016 campaign for lying about the funding of the infamous, and discredited, Russian “dossier” used in a smear attempt against Donald Trump weeks before he shocked the world with his 2016 presidential victory, Paul Bedard at the Washington Examiner reported.

The election agency said that Clinton and the DNC violated strict rules on describing expenditures of payments funneled to the opposition research firm Fusion GPS through their law firm.

A combined $1,024,407.97 was paid by the treasurers of the DNC and Clinton campaign to law firm Perkins Coie for Fusion GPS’s information, and the party and campaign hid the reason, claiming it was for legal services, not opposition research.

Instead, the DNC’s $849,407.97 and the Clinton campaign’s $175,000 covered Fusion GPS’s opposition research on the dossier, a basis for the so-called “Russia hoax” that dogged Trump’s first term. Continued Below

The memo said that the Clinton campaign and DNC argued that they were correct in describing their payment as for “legal advice and services” because it was Perkins Coie that hired Fusion GPS. But the agency said the law is clear and was violated.

It added that neither the campaign nor the party conceded to lying but won’t contest the finding. “Solely for the purpose of settling this matter expeditiously and to avoid further legal costs, respondent[s] does not concede, but will not further contest the commission’s finding of probable cause to proceed” with the probe, said the FEC.

In an email statement, 45th President Trump said that it “must never be allowed to happen again”. Continued Below

“Breaking News: Wow! Just out that the 2016 Clinton Campaign and the DNC paid the FEC today for violating the law by failing to disclose that their payments for ‘legal advice and services’ to law firm Perkins Coie was, in fact, a guise to hire numerous companies, all of whom are now named Defendants in my lawsuit, to try and take down and illegally destroy your favorite President, me,” the 45th President said.

“This was done to create, as I have stated many times, and is now confirmed, a Hoax funded by the DNC and the Clinton Campaign. This corruption is only beginning to be revealed, is un-American, and must never be allowed to happen again,” he said.

“Where do I go to get my reputation back?” Trump wondered.

“Breaking News: Wow! Just out that the 2016 Clinton Campaign and the DNC paid the FEC today for violating the law by failing to disclose that their payments for “legal advice and services” to law firm Perkins Coie was, in fact, a guise to hire… pic.twitter.com/ueFF8pPoRM

Last Thursday, Trump sued Hillary Clinton, the Democratic National Committee and several other Democrats, alleging they tried to rig the 2016 U.S. presidential election by tying his campaign to Russia, as previously reported by The Freedom Times.

The lawsuit filed by Trump names the following people:

The lawsuit can be read HERE.