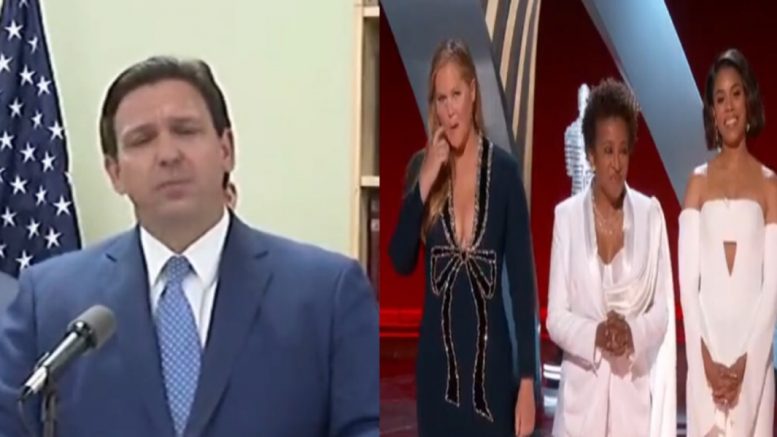 During Sunday’s night opening monologue at the Oscars, Wanda Sykes — one of the trio of hosts for the show — took a thinly veiled jab at Florida House Bill 1557: Parental Rights in Education, which forbids instruction on sexual orientation and gender identity in kindergarten through third grade that passed in the state legislature earlier this month.

"We're gonna have a great night tonight—and for you people in Florida, we're going to have a gay night."

Florida Governor Ron DeSantis (R) reacted, during a press conference on Monday, to the criticism from Hollywood towards the bill.

“There’s even people in Hollywood that are opposed to you know, providing protections for parents and enforcing parents rights,” DeSantis pointed out.

You know, the one thing I’ll say about this is, if the people who held up degenerates like Harvey Weinstein as exemplars and heroes and all that, if those are the types of people that are opposing us on parents right, I wear that like a badge of honor,” the Florida Republican governor expressed. Video Below

DeSantis absolutely drops the hammer on Hollywood for their criticisms of Florida at the Oscars last night:

"If the people who held up degenerates like Harvey Weinstein as heroes are opposing us on parents right, I wear that like a badge of honor." pic.twitter.com/8XhiyckHuT

DeSantis also said that he does not “care what corporate media outlets say” including “Hollywood” and “big corporations”, adding, “Here I stand. I’m not backing down”.

Gov. DeSantis says that Florida will not compromise on the rights of parents:

Meanwhile, the Florida governor signed the Parental Rights in Education bill into law on Monday.

BREAKING: Florida @GovRonDeSantis has SIGNED the Parental Rights in Education bill into law.

A big win for parents and children in Florida. pic.twitter.com/lINAs25rzH