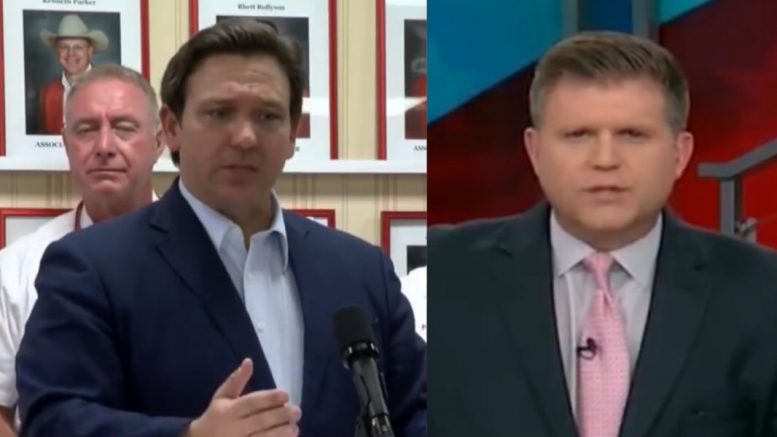 Evan Donovan, a political anchor and reporter for Tampa Bay’s WFLA News, posted a video of himself getting owned by Florida Republican Governor Ron DeSantis on Monday in regards to Florida House Bill 1557: Parental Rights in Education.

“Can I ask you about the Parental Rights in Education for critics who call ‘Don’t Say Gay’ bill is on the Senate floor?” Donovan began to ask DeSantis, which prompted the Florida Governor to correct the reporter.

“Does it say that in the bill?” Governor DeSantis immediately asked Donovan.

“I’m asking you tell me what’s in the bill, because you are pushing false narratives. It doesn’t matter what critics say,” the Florida governor said.

“For who?” DeSantis questioned, before setting the record straight. “For grades Pre-K through 3. Five-year-olds, 6-year-olds, 7-year-olds. And the idea that you wouldn’t be honest about that and tell people what it actually says, is why people don’t trust people like you, because you peddle false narratives”. Video Below

“And so, we disabuse you of those narratives. And we’re gonna make sure parents are able to send their kid to Kindergarten without having some of this stuff injected into their school curriculum,” DeSantis added.

Evan Donovan posted the exchange between him and Governor DeSantis:

Evan Donovan reported over the bill last week, appearing to leave out key information regarding the bill’s full context:

NEW: 'Don't Say Gay' bill will be heard on the Senate floor MONDAY.

Meanwhile, Governor DeSantis’ spokesperson Christina Pushaw commented on Monday’s exchange between the Florida governor and Donovan, writing, “This is an awesome clip Evan, one of the best moments of the press conference today”.

This is an awesome clip Evan, one of the best moments of the press conference today. Thanks for posting it!

Other users on Twitter also weighed in, appearing to mock Evan Donovan:

Evan doesn’t know any gay conservatives. We are all outraged by this bill.

Zero self awareness. Par for the course for the media class.

“Critics are saying” is not what a serious journalist prefaces their questions with. I would suggest you find a new job as a comms staffer for the Florida Democratic Party if you’re gonna keep repeating their talking points that you know are false.

“Critics say” is one of the most insidious and lame ways the media (writ large), including you, attempt to inject their own narrative into a story.

If the term “critics say” was banished from media lexicon, half of your inherent bias would immediately be removed.

Why are you people so obsessed with exposing very young children to sexual concepts you know they can’t understand? What are you grooming them for?

Why is the media not in agreement of protecting kids 8 yrs old and younger? LET THEM BE KIDS. They should have to try to understand adult issues at that age.