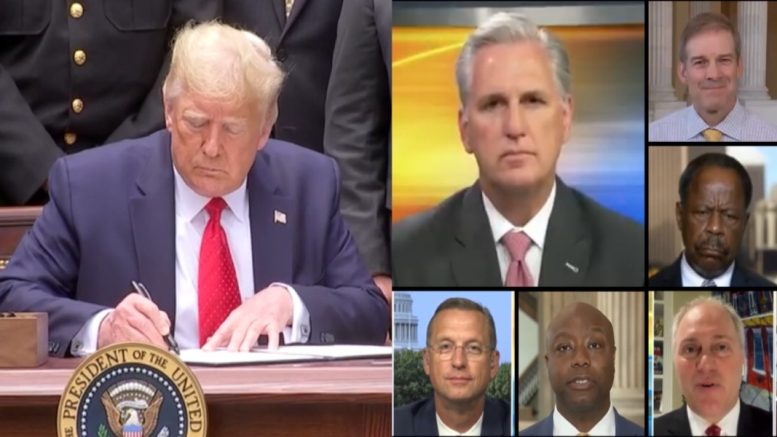 “As part of this new credentialing process, chokeholds will be banned except if an officer’s life is at risk,” the president said Tuesday in the Rose Garden.

The president made comments in the Rose Garden in which he struck a conciliatory tone while also expressing strong support for police before officially signing the order, which he characterized as promoting “the highest professional standards.” He also said, “These standards will be as high and as strong as there is on Earth,” reported Fox News.

“We’re united by our desire to ensure peace and dignity and equality for all Americans,” Trump said noting that he met with the family of Ahmaud Arbury, who died at the hands of two white men earlier this year in a high-profile case in Georgia, and families of other victims of racially-charged violence, per Fox News.

“These are incredible people … and it’s so sad. Many of these families lost their loved ones in deadly interactions with police … All Americans mourn by your side, your loved ones will not have died in vain,” Trump said. “I can promise to fight for justice for all of our people and I gave a commitment to all of those families … We are going to pursue what we said we will be pursuing it, and we will be pursuing it strongly.”

The President also showed his support for police, quoting statistics about the number of arrests made by local law enforcement for severe crimes. Continued Below

“I strongly oppose the radical and dangerous efforts to defund, dismantle and dissolve our police departments. Especially now when we’ve achieved the lowest recorded crime rates in recent history,” President Trump said. “Without police there is chaos, without law there is anarchy and without safety there is a catastrophe. When you remove the police, you hurt those who have the least, the most.”

According to the White House, Trump’s order touches on use of force best practices, information sharing to track officers who have repeated complaints against them and federal incentives for police departments to deploy non-police experts on issues like mental health, homelessness and addiction.

The president also said the Department of Justice would provide grants to police departments seeking independent credentialing for use of force and de-escalation training that holds them to high standards and that the federal government would provide funding for “co-responders” such as social workers to help police officers deal with issues like homelessness, mental illness and substance abuse, reported Fox News. Video Below

The order would also help departments secure less-than-lethal weapons that can help reduce the number of fatal encounters with police, and mandate that departments share information on officers who are accused of abusing power “so that officers with credible issues do not simply move from one police department to the next,” per Fox News.

Republicans responded to the president’s executive order, praising the Commander in Chief for his leadership to swiftly act and solve problems.

These are meaningful solutions, as opposed to Democrats’ push to defund the police and stoke anarchy.

We must do all three:
– Ensure equal justice
– Support police officers who uphold their oath
– Introduce better training and accountability

"Defund the police" is not a serious solution.

Very emotional meeting at the White House this morning with families of those killed by police in recent years. So grateful they are willing to share their powerful stories, and pleased to hear the President and AG commit to helping find answers and solutions.

Some seek to use this moment for partisan attacks and to advance a radical agenda that would ‘defund the police’ and unleash anarchy in our cities.

This Order is a tremendous step forward in improving the system and beginning a new era in the relationship between communities and the police officers that keep them safe.

.@realDonaldTrump’s EO lays a strong foundation for strengthening policing standards while prioritizing public safety. As @POTUS said today, increasing accountability and transparency is not mutually exclusive with keeping our communities safe. Together, we can achieve both.

As we consider reforms, we cannot ignore the fact that the vast majority of our police officers are courageous men and women who put their lives on the line each and every day to serve and protect our communities. To those officers: we thank you for your sacrifice.

With the signing of one #ExecutiveOrder , President #Trump has accomplished more police reforms than the eight years of the #ObamaBiden administration. That is an undisputed fact. @seanhannity @realDonaldTrump @JoeBiden @Foxnews

The President’s Executive Order falls seriously short of what is required to combat the epidemic of racial injustice & police brutality that is murdering Black Americans. We must insist on the bold change found in the George Floyd #JusticeInPolicing Act. https://t.co/tjNVJCiU3u