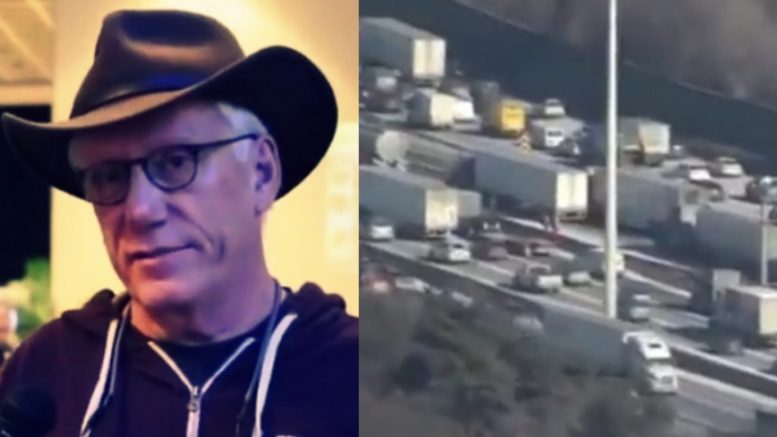 American actor James Woods imagined just how big of a “catastrophe” it would be if practically all truckers of any given country were to hang up their keys for two weeks to strike.

The notion made by Woods on Twitter comes in wake of a report that suggests thousands of U.S. truckers are planning to stage a nationwide convoy much like Canada’s “Freedom Convoy,” which left Vancouver for Ottawa on Jan. 23 to protest the federal government’s vaccine mandates for cross-border truckers.

The “Freedom Convoy” has since sparked protests across Canada involving other essential workers, such as farmers.

Related Article: Canadian Farmers Appear to Unite with Truckers & ‘Lock Down’ Toronto in Protest of Mandates

“Politics aside, the simple truth is this: if a nation of truckers were to strike for just two weeks, it would be a stunning catastrophe,” Woods tweeted on Friday. “Most people have no idea how essential these hard-working people are to our survival.”

Politics aside, the simple truth is this: if a nation of truckers were to strike for just two weeks, it would be a stunning catastrophe. Most people have no idea how essential these hard-working people are to our survival.

As previously reported by NBC 9 in El Paso, TX,:

Truckers in the United States are getting ready to follow the lead of their Canadian counterparts and form a convoy that will travel from California to Washington D.C.

This after 50,000 Canadian truck drivers formed a 45-mile convoy to Ottawa this week to protest the government’s vaccine mandate. The same mandate issued by the U.S. Department of Homeland Security who is requiring that non-U.S. essential workers such as truck drivers be fully vaccinated against COVID. If they are not fully vaccinated, they will not be allowed to cross land borders, from Canada or Mexico.

The American Truckers formed a Facebook group that as of Sunday has more than 67,000 members.

The page states that they support freedom and they are done with the mandates.

We are part of many large groups who believe in our founding fathers. We believe everyone has a voice. We support our freedom. Help us spread the word about this group and together we all can make it a better place.. God Bless America,” the page reads. Video Below

Truckers in the U.S. are preparing to form a Convoy that will travel from California to Washington D.C. in protest of mandates. pic.twitter.com/0r7bFQGZIZ

James Woods Trolls The Bidens As Video Suggests Hunter May Be Missing Another Laptop: ‘His Father Is POTUS’