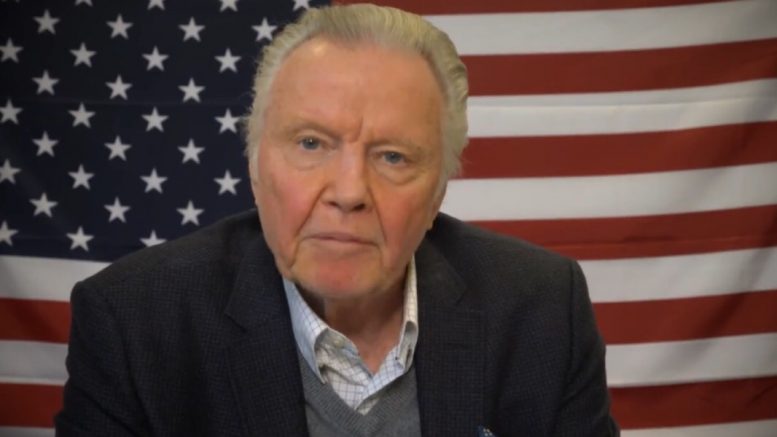 Academy award-winning actor Jon Voight released a video message on Wednesday praising Donald Trump and suggested that the 2020 Presidential Election was “stolen” from the 45th President.

“We must give applause for our hero. Yes, he’s been the greatest president since Abraham Lincoln. I said that before, and I say it again with much truth,” Voight said of Trump, referencing a video message he posted last last February.

“He’s given hope to the American people, he’s given trust and love — a man of integrity, a man of devotion, a man who ran the entire country with great heart and soul,” Mr. Voight expressed.

“I’d like to give President Trump an honor,” he said. “I know we all would; a spiritual honor from the American people, so that we can override this negativity and he can come back and make America great again. For he and only he can turn around this nation’s gloom.”

“Hope has arrived, and we shall never feel this loss again, for we all know it was stolen, and we the American people know the truth,” the conservative actor said, likely referring to the highly-questionable 2020 Presidential Election.

“Donald J. Trump is a source of God’s speed and I know Abraham Lincoln’s spirit is with him to turn America great again. God bless,” Voight concluded. Video Below

In November 2019, Voight was honored with the National Medal of Arts at the White House.

Also, in 2019, Trump appointed ten new members of the Kennedy Center’s board of trustees. The most high-profile among them are actor Jon Voight and former Arkansas GOP governor Mike Huckabee, the White House had announced in a statement at the time.

The trustees will serve the remainder of a six-year term through September 2024.

The John F. Kennedy Memorial Center for the Performing Arts opened in 1971, stemming from legislation signed into law by President Dwight Eisenhower in 1958. According to the organization’s website, the goal was to create an independent and self-sustaining supporter of the arts that would be privately funded. Originally called the National Cultural Center, the facility was named for President Kennedy after his assassination in 1963, Fox News reported.