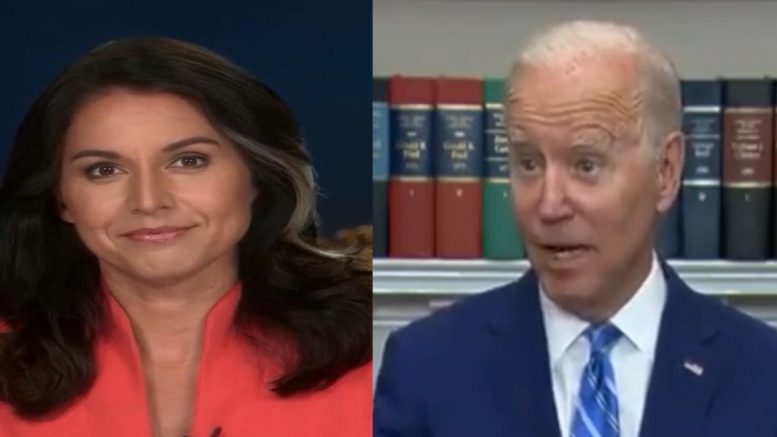 His assertion came in response to a question about Monday night’s leak draft opinion written by Justice Samuel Alito regarding Roe v. Wade.

“When you look at the president of the United States America calling millions of Americans essentially terrorists — people who politically opposed him, or voted against him — he’s calling them terrorists in an attempt to intimidate them into silence,” Gabbard said.

“We know this because we’ve heard this before from both him and his attorney general. You remember when his attorney general said, you know, anyone who holds extremists or anti-authority views, will be targeted for investigation and potential prosecution by their domestic terrorists unit,” she explained of the DOJ’s announcement earlier in the year.

“So [Biden] is essentially saying this quote, unquote ‘MAGA crowd’ are worse than terrorists,” Gabbard said. Continued Below

“This is outrageous and so for every America who is [listening] … no matter how you feel about the MAGA crowd, this is an authoritarian assault on our freedom, and we need to stand together very strongly against this attempt to intimidate and silence anyone who holds political views that are different from or opposed to what this president and his administration are furthering”, she recommended.

“This is an assault on our democracy,” Gabbard added.

She also advised Americans to “condemn Biden’s authoritarian effort to intimidate those who oppose him politically into silence”. Video Below

Biden saying the "MAGA crowd" is "most extreme political organization" in history is outrageous. No matter our political affiliation or how we feel about the “MAGA crowd,” we all must condemn Biden's authoritarian effort to intimidate those who oppose him politically into silence pic.twitter.com/SQVqe3Ven3

(Related: Gabbard to Romney: ‘Provide Evidence What I Said is Untrue & Treasonous. If you Cannot, you Should do the Honorable Thing: Apologize & Resign From the Senate’