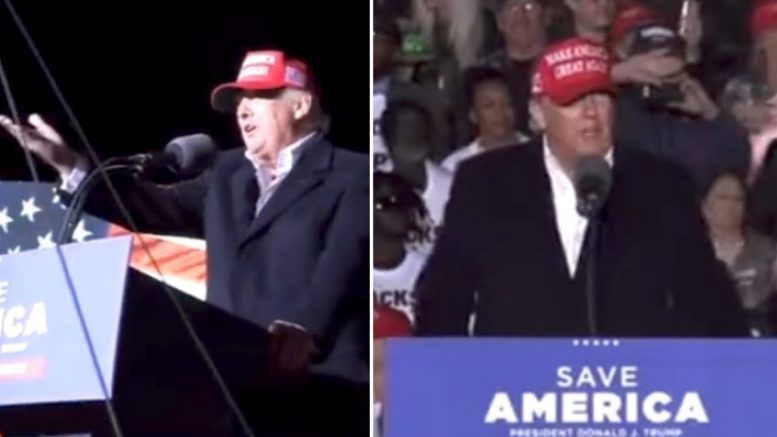 Appearing at his “Save America Rally” in Florence, Arizona, 45th President Donald Trump blasted the media for repeatedly writing off allegations of fraud in the 2020 election as a “Big Lie.”

“We had a rigged election and the proof is all over the place. We have a lot of proof and they know it’s proof,” Trump said to his supporters.

Related Article: Trump Zeroes In On Liz Cheney After She Slams His ‘Big Lie’ Remarks: “She’ll Never Run in A Wyoming Election Again!”

“The Big Lie… the Big Lie is a lot of bullshit. That’s what it is,” declared Trump as he was met with roaring cheers from the rally crowd. “Because they’re in the pocket of the Radical Left Democrats — the same people who are destroying our country.”

Trump also turned attention to the chaos that erupted at the Capitol on January 6th and questioned how many agents of the federal government were complicit in stirring up the events.

We leave you with that clip:

"Exactly how many of those present at the capitol complex on January 6th were FBI confidential informants, agents or otherwise working directly or indirectly with an agency of the United States government?" 🔥🔥🔥 pic.twitter.com/ArHLvWrJnQ

‘I Call on All Patriots to Get Behind His Campaign’: Sen. Rogers Endorses Josh Barnett for Congress