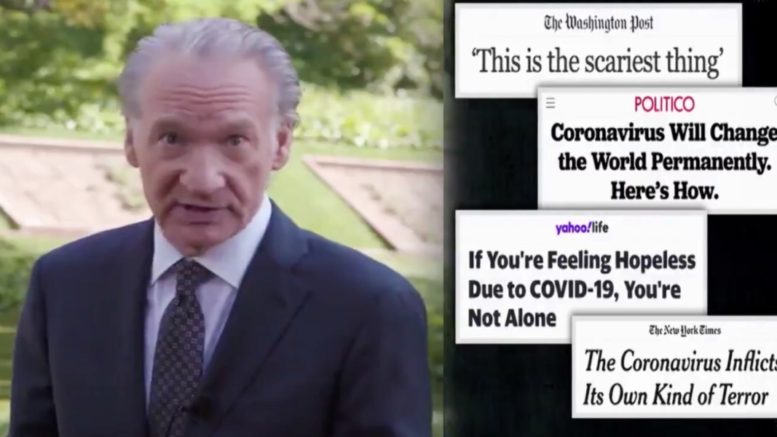 On Friday, HBO’s “Real-Time” host Bill Maher called out the media and news sources for appearing to use sensationalism headlines during the coronavirus pandemic, warning them to “calm down and treat us like adults”.

“New rule: now that we’re starting to see hope in all this, don’t ‘hope shame’ me,” Maher insisted. “You know the problem with nonstop gloom and doom is, it gives [President] Trump a chance to play the optimist. And optimists tend to win American elections.”

“[Franklin D. Roosevelt] said ‘The only thing we have to fear is fear itself.’ You know as full of sh*t as he is, I can see Trump riding that into a second term,” Bill Maher said. “And then there will be no hope left for you to shame.”

“Last month the Washington Post ran the headline ‘It feels like a warzone'”, Maher read, while displaying a grocery worker that appeared to be unloading eggs next to rows of bacon. “This is not a warzone. This is a man with a box of eggs. And I’ve never seen this much bacon”.

“And how about this one?” He asked, then noted a headline from the Daily Mail titled: “‘Horrifying simulation reveals the dangers of jogging during the coronavirus pandemic’. Look, this virus is easy to catch, but if you can’t avoid it jogging, you can’t outrun much,” Maher said. Continued Below

“Two weeks ago, Inside Edition said, ‘76,000 in the world had died, so some are making comparisons to the Apocalypse’. The Apocalypse, really?” Maher asked. “Because most of us are sitting at home smoking delivery weed and binge-watching a show about a gay zookeeper.”

“Unless you’re a frontline healthcare worker, for whom the phrase ‘above and beyond the call of duty’ doesn’t even begin to cover it. This is not the apocalypse,” the “Real-Time” host expressed.

“But the New York Times? They used the same word last week. ‘Graced For Apocalyptic Surge, New York Avoids Worst, So Far’, Mahar pointed out. “And this was an article about how much better the city was doing than expected. Projections had them needing fifty-eight thousand hospital beds. And it turned out they needed a quarter of that. Still bad. But you don’t have to put hot sauce on a jalapeno.” Continued Below

Maher noted another recent New York Times headline titled: “It’s Terrifying: Millions More Out Of Work”, then asked, “What the f**k is ‘terrifying’ doing in a headline? Granted it’s a quote, but who are they quoting? Trump? Fauci? Stephen King? No, they’re quoting an event planner in North Hollywood. No offense to the event planners of the world. … But why are you in my headline?”

“How about this? Just tell me millions are out of work without the flashlight under the chin, and I’ll decide how I feel about it. There [were] never headlines like this before,” he continued and pointed out there was no “Terrifying” in the headline of the papers when the World Trade Center was destroyed in 2001, during the September 11 terrorist attacks.

“We need the news to calm down and treat us like adults. [President] Trump calls you fake news. Don’t make him be right,” Maher recommended. Video Below

We need the news to calm down and treat us like adults. Trump calls you #fakenews. Don't make him right. #Coronapocalypse #PanicPorn pic.twitter.com/PcJA8ccliM

In ending, here is a prime example of what Maher is warning the media not do:

I crawled in bed and cried for our pre-pandemic lives. Tears that had been waiting a month to escape.

I wanted to share because it feels freeing to do so. Now is not a time for faux-invincibility. Journos are living this, hating this, like everyone else. https://t.co/dIDujZZvQZ

(Related: Bill Maher Rips Ted Lieu & Co.’s Outrage Over COVID-19 Being Named From Where It Originated: “Can’t We Even Have A Pandemic Without Being Offended?”)