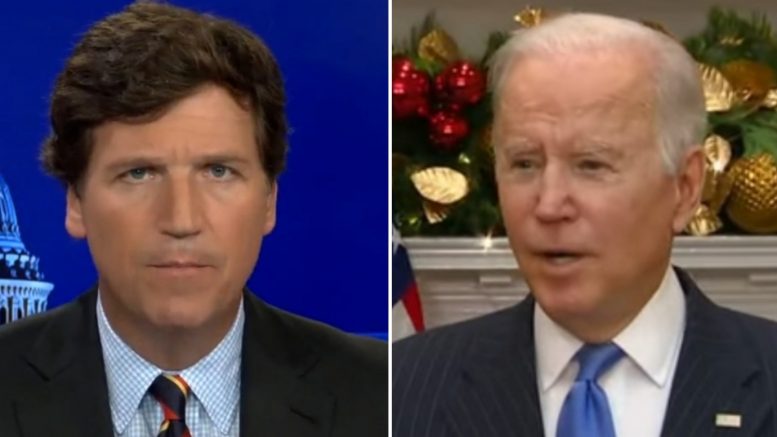 “So let’s say you’re President of the United States and you wake up one morning, you look at your numbers and find yourself somewhat less popular than chlamydia. What do you do?” Tucker Carlson asked his audience during his Monday program.

“You already lost control of the border and of the economy of the society itself, so maybe you would start a war with Russia… totally possible. Desperate politicians do desperate things. That is possible.”

Let's say you're President and you find your poll numbers make you somewhat less popular than chlamydia. What do you do? pic.twitter.com/VXqby2tahO

“A stunning 46% of those surveyed believe Biden is doing a worse job as president than expected, including 16% who supported him at the ballot box last year,” GOP chair Ronna McDaniel reported on behalf of Fox News.

Since the bad polling data was released, media reports signaled that Biden is poised to directly confront Russian President Vladmir Putin on Tuesday via a video call.

As reported by CNN:

…Joe Biden is set for one of the most critical calls of his presidency on Tuesday with Russian President Vladimir Putin, as he gets stark warnings from the US intelligence community that Russia is preparing to invade Ukraine as soon as next month.

Amid “deep concern” about Russia’s planning for “significant military action against Ukraine,” the President will not entertain any of Putin’s “red lines” on NATO expansion in Eastern Europe and will make clear that the US is prepared to respond to an invasion with sanctions and — if needed — additional troops in Europe to reassure nervous allies, a senior administration official told reporters on Monday.