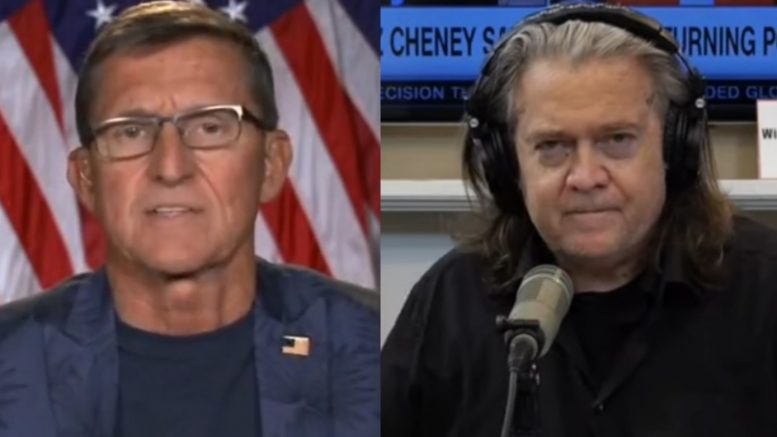 “It shows the speed in which the Democratic party is moving to confirm their complete takeover of this country,” retired Army Lt. General Michael Flynn said in reaction to Steve Bannon’s indictment.

Bannon was indicted by a federal grand jury on Friday over his refusal to cooperate with the Congressional investigation into the Capitol Riot on January 6.

“What I think we are really facing is an attack or an assault on all of our basic rights,” Flynn told Fox News host Tucker Carlson. “The real issue here in play is the attack on freedom of speech.”

He continued, “The assault on the freedom of speech, our ability to peaceably protest, our desire to seek the truth in the security of our election systems and processes — I mean this is what all is at risk in our country today, and they don’t want us to be talking about these things.”

“And so they’re also going to use the ‘insurrection crucifixion’ of this January 6th, you know this whole series of things going on. It’s really to steal away what we are also seeing in the news, which is the continuation of the Durham investigation where you have indictments coming out. You have this incredibly failed foreign policy by the Biden Administration. You have… very, very clear evidence coming out about COVID, and really the conspiracy behind COVID and some of the things that are happening with it… The more they can keep this January 6th news — and the big media does a good job of making sure it pounds the Americans’ heads with it on a daily basis — by doing things like issuing more and more subpoenas. I don’t doubt that there’s more to come from this.”

Related Article: Rep. Greene Sounds Off After Bannon Is Indicted For Contempt Of Congress: “Commies Always Go After The Strongest First”

Flynn went on to signal that he plans to respond to the subpoena that was issued to him by the January 6th congressional commission because he doesn’t “have anything to hide.”

“There’s nothing there. And I think that what we are facing is a clear assault on our basic rights and, principally, our freedom to speak freely in this country and to peaceably for things that we believe are false or fraudulent,” he declared. Video Below

General Flynn: "It shows the speed in which the Democratic party is moving to confirm their complete takeover of this country." pic.twitter.com/mgEbGxOKoV

Mike Lindell Reacts As Dominion Files A $1.3 Billion Lawsuit Against Him: “It’s A Beautiful Day Here For America!”