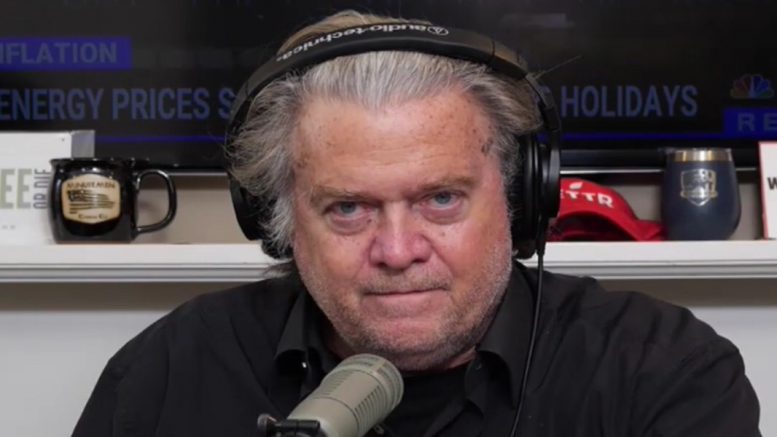 Steve Bannon, former White House’s chief strategist for 45th President Donald Trump, was indicted Friday, according to Joe Biden’s Justice Department, for two counts of contempt of Congress after he defied a congressional subpoena from the House committee investigating the January 6 breach of the U.S. Capitol.

The Justice Department said Bannon was indicted on one count for refusing to appear for a deposition and the other for refusing to provide documents in response to the committee’s subpoena. It is not immediately clear when he is due in court.

“Since my first day in office, I have promised Justice Department employees that together we would show the American people by word and deed that the department adheres to the rule of law, follows the facts and the law and pursues equal justice under the law,” said Attorney General Merrick Garland in a press release. “Today’s charges reflect the department’s steadfast commitment to these principles.”

Each count of contempt of Congress carries a minimum of 30 days and a maximum of one year in jail, as well as a fine of $100 to $1,000. A federal district court judge will determine any sentence after considering the U.S. Sentencing Guidelines and other statutory factors, according to the press release.

An indictment is merely an allegation and all defendants are presumed innocent until proven guilty beyond a reasonable doubt in a court of law. Continued Below

The Justice Department tweeted the press release on Friday:

Bill Maher Rips Ted Lieu & Co.’s Outrage Over COVID-19 Being Named From Where It Originated: “Can’t We Even Have A Pandemic Without Being Offended?”

Tucker Carlson: ‘This Show has Obtained a Subpoena From Merrick Garland’s DOJ Issued in the Past Week’

Rep. Mo Brooks To Jim Acosta: “I Do Not Do Interviews With CNN Because I Do Not Trust CNN To Be Honorable Or Truthful”