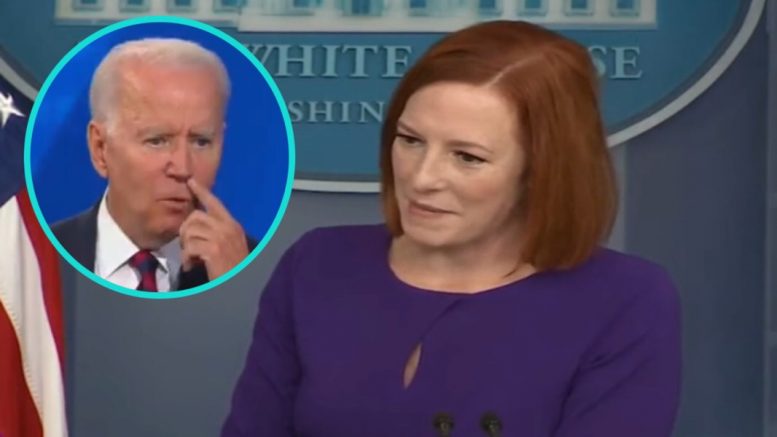 White House press secretary Jen Psaki claimed that Joe Biden does not “spend much time focused on or thinking about” the phrase “Let’s go Brandon!”

“Across this country we’ve seen this new phenomenon lately, chanted at sporting events and on signs. The phrase is ‘Let’s go Brandon’, as sort of code for a profane slogan attacking President Biden. What does the president made of that?” Alexander wondered.

“I don’t think he spends much time focused on it or thinking about it,” Psaki alleged.

Alexander told Psaki that Biden said when he came into office on Inauguration Day he “help get rid of the uncivil war in this country”. He further asked, “So I guess in that lens right now, does the president think there’s things he can differently, or how does he react to the stuff he sees out there when it is one of his primary promises or desires to help bring Americans together?” Continued Below

Psaki replied, “It takes two to move towards a more civil engagement discourse in this country. And the president’s going to continue to operate … from the promise he made early on, which is he wants to govern for all Americans.”

“He’s going to deliver for all Americans, as is evidence from the Infrastructure Bill … no matter your political party, no matter if you voted for him or not,” she said.

“Certainly, we’re hopeful we’ll have partners to move toward more civil discourse in the future,” Psaki added. Continued Below

In September, however, Biden was asked what is going through his mind on the 20th anniversary of 9/11 — at the place where United 93 crashed. Joe Biden responded in part, “I’m thinking about today is what these people … What would the people who died be thinking?” as previously reported by this publication.

“They think it makes sense to be doing this kinda thing where you ride down the street and see a sign that says ‘F so-and-so’?” Biden asked, appearing to contradict Psaki’s remarks.

“What would the people who died be thinking? They think it makes sense to be doing this kinda thing where you ride down the street and see a sign that says ‘F so-and-so’?” pic.twitter.com/gbOPWrxajd

Trump Reacts to Report of Secret Service Agents Willing to Testify he did Not Lunge at Steering Wheel on Jan. 6