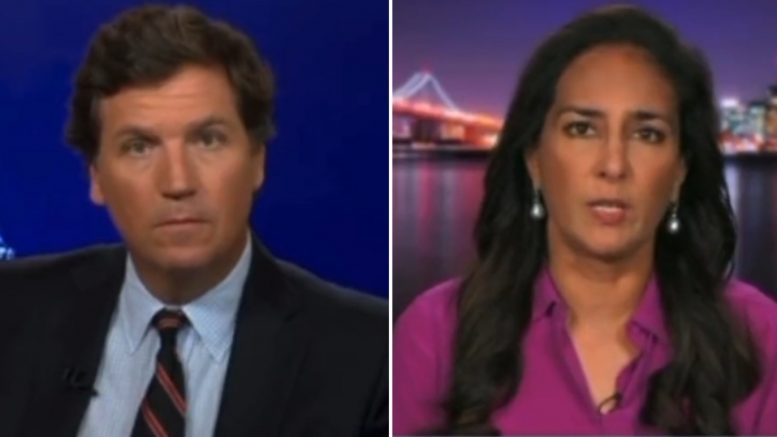 Harmeet Dhillon of the Dhillon Law Group revealed that the FBI is issuing subpoenas and search warrants to approximately 50 people who are allies of 45th President Donald Trump.

The high-profile attorney gave details of the latest unprecedented effort while appearing on Tucker Carlson Tonight.

“A few days ago, a political reporter called several people and said, “Hey, have you heard or have you been served yet. The FBI is going to be serving 50, approximately, search warrants and/or subpoenas on Trump supporters.” And then within 24 hours of that… three of our clients actually either did get search warrants or subpoenas,” Dhillon said.

She continied, “And these subpoenas are extremely broad. They’re from the “Capitol Seige” section of the United States Department of Justice’s DC office and they ask for broad categories of documents, they ask for all communications dating from a month before the election until two months after the election, and they ask for all communications regarding dozens of people, and the categories are alternate electors, fundraising around irregularities around the election and also a rally that happened before the January 6th situation at the Capitol — the Save America Rally that happened.”

Dhillon went on to proclaim that such measures taken by the DOJ is being done to “instill fear into Donald Trump supporters and into those who would challenge election irregularities right before an upcoming election.” She also suggested it’s “illegal” for the DOJ to “leak” all info related to subpoenas and search warrants to the media.

The Purge Of MAGA Continues@pnjaban Joins Tucker Carlson To Confirm That The DOJ And FBI Are Continuing To Raid Trump Supporters And Tipping Off The Media Ahead Of The Raids pic.twitter.com/qYvpFafhLj

The latest reported subpoaenas and search come just weeks after former President Trump’s Mar-a-Lago home was raided by the FBI.

Steve Bannon and Charlie Kirk gave more in-depth coverage of the latest raids. We leave you with that video.