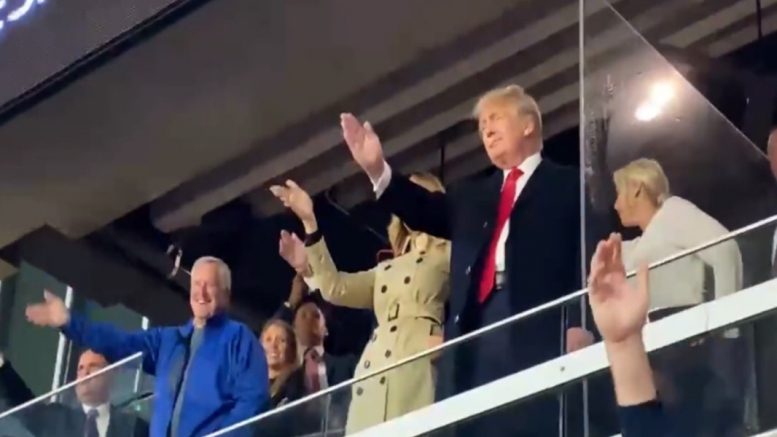 45th President Donald Trump and his wife, former First Lady Melania Trump, were seen in an open-air suite at Truist Park during Game 4 of the World Series, taking part in the Atlanta Braves’ “tomahawk chop” moments before game time.

The “chop” has been a part of the team’s home games for about three decades, with fans echoing a chant as they rock their arms back and forth in a chopping motion, Sporting News reported.

Trump does the Tomahawk Chop at The World Series pic.twitter.com/CbtRAVybyB

Another view of Trump and Melania doing the “chop”:

Former President Donald Trump and his wife Melania in a suite at Truist Park ahead of Game 4 of the #WorldSeries pic.twitter.com/rq3NKZIniT

Trump and Melania are seen standing to the National Anthem:

The 45th President had issued a statement via email from his “Save America” PAC before the game, announcing that he would be attending Game 4 of the World Series in Atlanta, Georgia on Saturday as the Houston Astros and the Atlanta Braves face off for the Commissioner’s Trophy in 2021, as previously reported by The Freedom Times.

“Looking forward to being at the World Series in Atlanta tonight,” Trump expressed in his statement. “Thank you to the Commissioner of Baseball Rob Manfred, and Randy Levine of the great New York Yankees, for the invite”.

“Melania and I are looking forward to a wonderful evening watching two great teams!” he added.

Herschel Walker, the former Heisman Trophy winner whose bid for a Georgia senate seat is backed by Trump, was also in the suite, USA Today reported.

Bongino Unveils Multiple Instances Of How Biden Is A ‘Liar’: “When Biden Is Exposed In The Debate[s]… Gonna Be The End Of His Campaign”