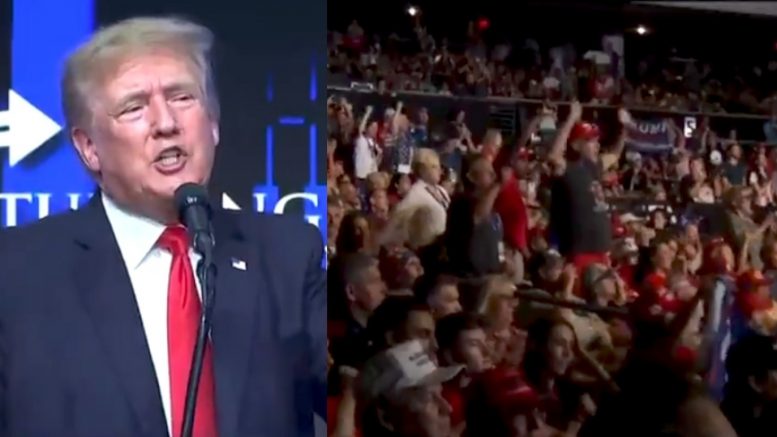 Speaking at a Turning Point Action event in Arizona, 45th U.S. President Donald Trump declared on Saturday that the 2020 election was ‘the most corrupt, dishonest and unfair election in the history of our country.’

“Everyone here fully understands the 2020 election was a total disgrace. It was the most corrupt,” Trump said before his crowd of supporters cut him off as they erupted into cheers and “Trump Won!” chants.

President Trump says the 2020 election was a disgrace. It was the most corrupt, dishonest, and unfair election in the history of our country. They tell him to just MoveOn but we’re not going to have a 2022 or 2024 election unless they find out how they cheated in 2020. pic.twitter.com/gVvfOPC7dn

The radical left Democrat communist party rigged and stole the election and we caught them. The time to hold them responsible and fix this corrupt and rig system isn’t in 2022 where it may be just as corrupt and you’re not going to win. pic.twitter.com/8eiPNxfXAq

The former President went on to highlight some of the following bombshell findings that were disclosed by Maricopa County auditors at a recent state senate hearing in Arizona:

“We will stand up for democracy and for justice We will fight for truth, transparency and accountability,” Trump later proclaimed during his speech. “And we will not stop until we have restored our American birthright of honest fair and free elections.”

President Trump says with your help we will fight for truth, transparency, and accountability and we won’t stop until we have restored our birthright of free and fair elections. pic.twitter.com/uqKYQ0KJ31

Nikki Haley On Qassem Soleimani’s Death: “His Demise Should Be Applauded By All Who Seek Peace And Justice”