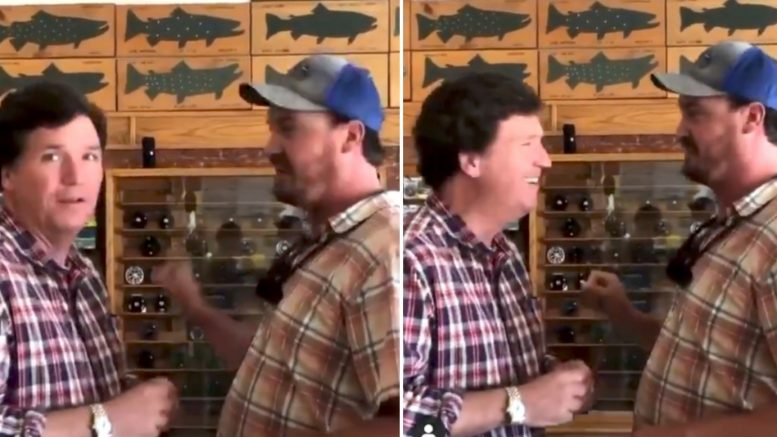 Fox News host Tucker Carlson held his own after a random man confronted him in a store in Livingston, Montana while stocking up on fly fishing gear.

In a video posted to social media, a man by the name of Dan Bailey is seen confronting Tucker face to face and telling him: “Dude, you are the worst human being known to mankind. I want you to know that.”

“I appreciate that,” Tucker replies before looking at the camera and laughing hysterically.

“Settle down, son,” Tucker replied to Bailey, who appeared agitated. “Don’t call me son,” Bailey said as Tucker walked away.

“This man has killed more people with vaccine misinformation, he has supported extreme racism, he is a fascist and does more to rip this country apart than anyone that calls themselves an American,” Bailey said in the caption of the video that he posted to his Instagram profile.

Tucker Carlson tells a man who confronts him in a fly fishing shop to “settle down, son.”
pic.twitter.com/PlsCSU9HWS

The confrontation reportedly took place at Dan Bailey’s Outdoor Company and ironically shares the same name as the man in the video, but is in no way affiliated to him.

The store posted the following statement on its website:

On July 23rd, a well-known television personality, Tucker Carlson, was affronted while shopping at Dan Bailey’s Outdoor Company. Coincidentally, the person engaging Mr. Carlson was a local resident named Dan Bailey. This person has no affiliation with our business, other than he shares the same name as our founder, who passed away in 1982. To be clear, we treat every customer equally and respectfully. Our staff was professional and cordial to Mr. Carlson, as we are with all of our customers.