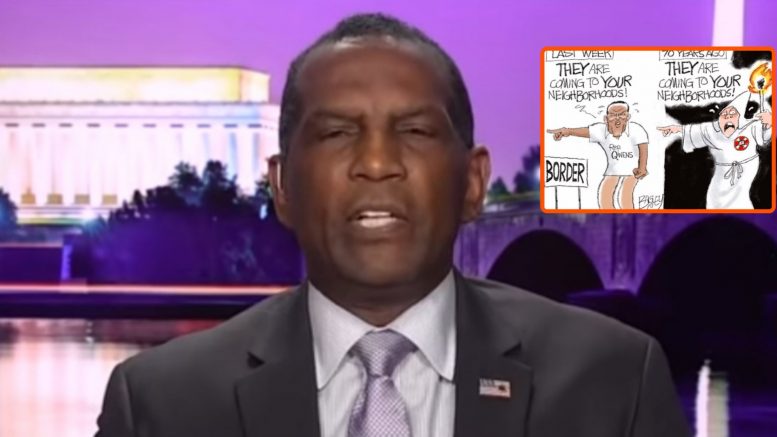 Appearing on Friday’s airing of Hannity, Congressman Burgess Owens (R-UT) turned the tables on a cartoon published by Salt Lake Tribune that compares him to white supremacist Ku Klux Klan.

In response, Rep. Owens said those responsible for the cartoon are nothing but “bullies and cowards” who “hide behind a newspaper so complicit” and attack those who don’t agree with them. And he told Sean Hannity “They’re projecting exactly who they are.”

Related Article: Burgess Owens: “We Have A Complicit Media Who Refuses to Talk About This Journey, This Magnet of These Young Girls & Boys”

Here is Rep. Owens’ initial reaction to the cartoon:

The @sltrib and @Patbagley compare me to the KKK, the radical hate group that terrorized me in my youth, because I am one of many sounding the alarm of the trauma being faced by women and children crossing the border. This is pathetic. #wokeracism pic.twitter.com/Tzcj4lPixL

Burgess Owens: “We Have A Complicit Media Who Refuses to Talk About This Journey, This Magnet of These Young Girls & Boys”