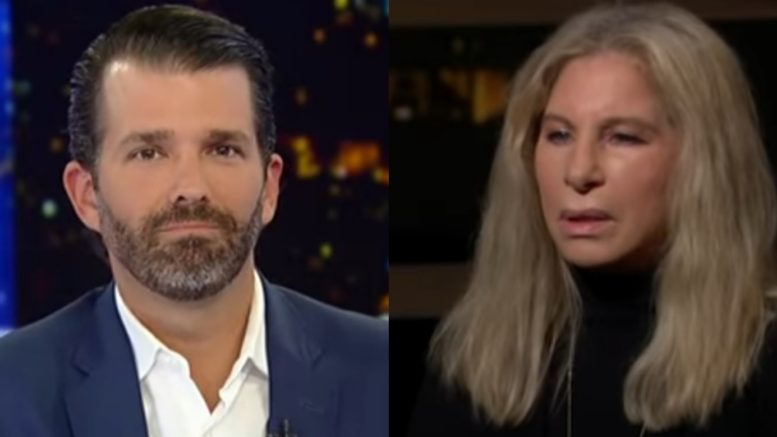 The cartoon shows the heal of a shoe piercing straight through a bloodied President Trump. And the shoe has “Pelosi” engraved on it in white letters.

Streisand tweeted the cartoon without a caption, but it came just days after Pelosi along with Senate Minority Leader Chuck Schumer stormed out of a meeting with the President, and as the House Speaker is leading the push to impeach Trump.

Streisand is known for often attacking President Trump as majority of her tweets are directed at him and his administration.

Just moments after tweeting the cartoon, Streisand said, “Donald Trump has destroyed our nation’s credibility with our long term allies. As Nancy Pelosi said to him, ‘All roads with you lead to Putin.'” Cartoon Below

Here Is Barbra Streisand’s Tweet That Shows The Cartoon

Upon seeing an article about Streisand’s tweet of the gory cartoon, the President’s son, Donald Trump Jr., issued a reaction on Twitter, where he targeted the media over their lack of outrage on the matter.

“Looking forward to the media outrage like when someone shared a cartoon meme to 8 people depicting media violence,” Don Jr. said.

“But seriously, who are we kidding? Their outrage only flows one way,” he declared.

Looking forward to the media outrage like when someone shared a cartoon meme to 8 people depicting media violence. But seriously, who are we kidding? Their outrage only flows one way.