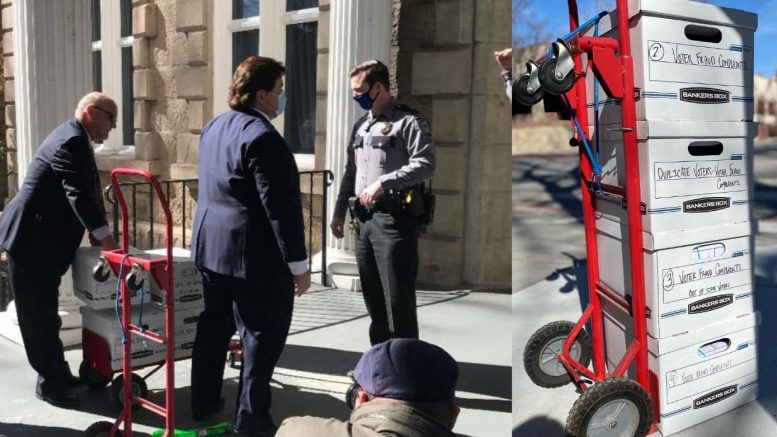 Nevada’s Republican Party issued a statement after the Secretary of State Barbara Cegavske’s office claimed to have received only a small fraction of 122,918 unique voter complaints that the GOP said were turned over to the state on March 4th.

The boxes of records that were delivered by Nevada’s GOP purportedly contain thousands of reports of violations involving non-citizens, deceased individuals, duplicate votes, non-existent addresses and other kinds of suspicious activity surrounding the 2020 election.

Nevada Secretary of State’s office posted the following press release on Tuesday in regards to the records that were turned over:

“On March 4, 2021, members of the Nevada Republican Party delivered four boxes of documents to the Capitol building in Carson City, NV. These boxes were screened according to security protocols and were delivered to the Office of the Secretary of State. Over the following days and consuming more than 40 staff-hours, the boxes and their contents were inventoried, labeled, and evaluated in order to ensure a systematic assessment of the election complaints contained within.

“While initial reports claimed that there were 122,918 unique voter complaints contained within the four boxes, a detailed review concluded that there was a total of 3,963 Elections Integrity Violation Reports, all filed by the chairman of the Nevada Republican Party – a number of which are already under investigation by law enforcement.

“During the coming weeks the staff will conduct a detailed examination of these reports.”

In response, Nevada’s Republican Party published the following message to their website:

“These 122,918 voter records were submitted on 40,669 separate Election Integrity Violation Reports. For some of the above categories, it made more sense to combine into one single report with an attached list of individual voters, rather than submitting as individual EIVR’s. While all of these reports were hand delivered to the SOS office through paper and electronic forms, we will now follow up with emailed copies of each and every complaint.

“This investigation should have occurred months ago as the Secretary of State had access to this exact data during lawsuits last year. She has said time and time again that there was no evidence of voter fraud and thus nothing to investigate. Today, her office is validating our assertion that there is voter fraud in the 2020 election by claiming many of these reports were ‘already under investigation’.

“We need better transparency from our elected officials investigating these matters, especially with so many Nevadans questioning the integrity of our voting process. We hope that Secretary Cegavske finally demonstrates a commitment to the concept that no amount of voter fraud is acceptable in the great State of Nevada.”

AZ Sen. Rogers Issues a Statement In Response To People Who Are ‘Frustrated’ Over Audit Delays