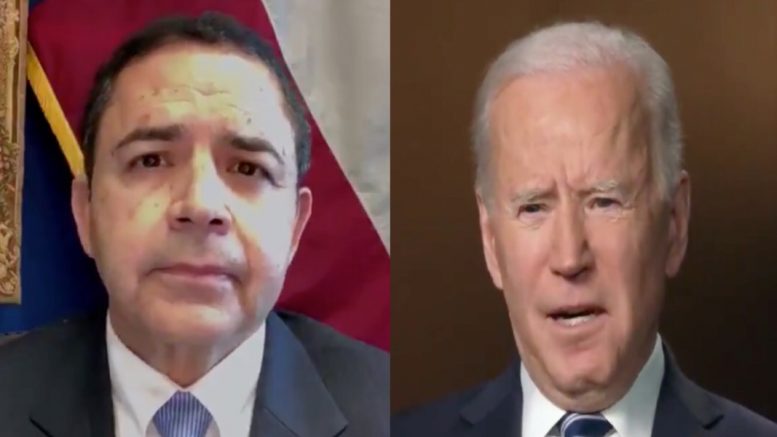 Rep. Henry Cuellar (D-TX) criticized the Biden administration regarding the surge of illegal aliens and unaccompanied children arriving at the U.S.-Mexico border, during a Wednesday interview on MSNBC with host Chuck Todd.

Cuellar precisely warned that the Biden administration has to fix their “bad message” for illegal immigrants, urging, “It’s got to be clear and concise”.

Asked what specifically he would like to see the Biden administration do regarding immigration, Rep. Henry Cuellar said, “First of all, within one week of the Inauguration, I was calling the White House already– my contacts– and saying, ‘Hey, I want you to please see what’s happening on the ground’. This is back in January.”

“I was telling the White House folks you gotta understand what I’m seeing here. I’m seeing the numbers, because I live on the border. I don’t just go visit the border, I live there. I go there right after my votes in D.C. And so, I’ve been warning the administration,” he said.

The Texas Democrat congressman told Chuck Todd that there are “a couple things we need to do” regarding legal immigration.

“First we gotta understand that there’s three messages. The administrations message has to better. You can’t say, ‘Don’t come now, come later.’ That’s a bad message. It’s gotta be clear and concise. Don’t come in here illegally. That should be the message,” he urged. Continued Below

“Message number two is what I call the networks of friends and family. ‘Hey Pedro, I was able to come over. You outta come over’. And they see images like what you’re playing right now to people coming across. So of course, they’re gonna come in,” Rep. Cuellar said, as MSNBC displayed images on the screen of illegal aliens climbing over border fencing to get into the USA.

“The third message real quickly: The criminal organizations– that is a powerful message, because they charge an average of $6,000. Imagine we had a hundred thousand people that crossed in February. Do the math, that’s 600 million dollars that they made,” he explained.

Border-state Democrat Rep. Henry Cuellar: “I’ve been warning the administration” for months, they have “a bad message”https://t.co/2X7JkYKB5a pic.twitter.com/s8Fnna9Lvy

During an ABC News interview on Tuesday, Biden weakly told illegal immigrants, “Don’t come or leave your town or city or community”, adding, “We’re in the process of getting set up”.

Pres. Biden: “The idea that Joe Biden said, ‘Come!’ I heard the other day that they’re coming because, you know, I’m a nice guy.”

Meanwhile, Rep. Brian Mast (R-FL) on Wednesday tweeted a video of past remarks of Biden from 2019, where he publicly said, “What I would do as president is several more things because things have changed.”

“I would, in fact, make sure that there is– that we immediately surge the border. All those people are seeking asylum,” Biden declared.

President Biden's policies have CREATED a CRISIS at our Southern Border.

What’s worse is Biden told the American people in 2019 that this was his goal.

(Related: 45th President Trump On Biden’s Border ‘Crisis’: “It’s Going To Get Much, Much Worse… It’s A Disgrace”)