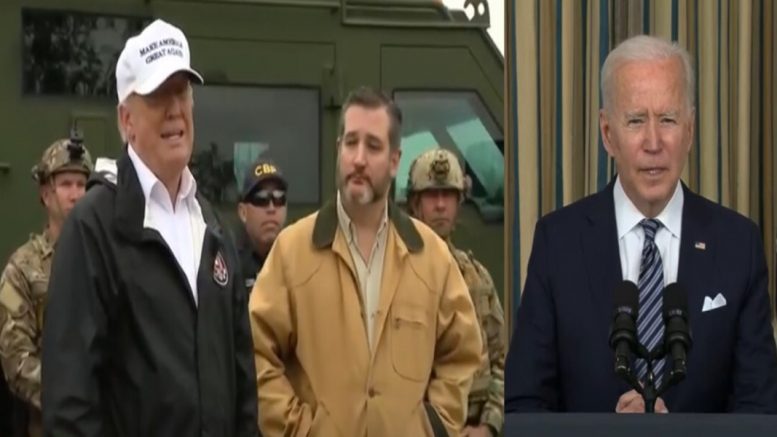 During a Tuesday interview with host Maria Bartiromo on Fox News, the 45th President weighed in over how the Biden administration is handling the massive surge of illegal aliens and unaccompanied migrant children at the U.S. southern border.

Former President Donald Trump believes the situation at the southern border is “going to get much, much worse” if the Biden administration does not get a handle on the current “crisis” at hand.

President Trump said that his administration’s policies for immigration were “working better than they’ve ever seen on the southern border”, adding, “The Wall is almost complete. We just had to fix little sections, complete little sections that had to be together.”

“[The Biden administration] has chosen to stop right in the middle. They could have it finished in a month,” Trump said regarding the construction of the Wall. “And it would be just magnificent. It already is magnificent what it’s done in the areas where it’s totally completed. But just small sections are remaining, and they should finish it.”

“They’re destroying our country. People are coming in by the hundreds of thousands. Young children are coming in. They leave their homes and they come up because they think they’re going to come up and it’s going to be so wonderful, and frankly, our country can’t handle it. It is a crisis like we’ve rarely had and certainly, we’ve never had on the border,” he expressed.

“But it’s going to get much worse,” the former president predicted. “What you’re seeing now is very bad, record numbers. But it’s going to get much, much worse. With a little bit of time, you’ll see those numbers expand at a level like you’ve never seen before. … They’re pouring into our country. It’s a disgrace, they’re going to destroy our country if they don’t do something about it.” Video Below

"It's going to get much worse."

"They're pouring into our country. It's a disgrace, they're going to destroy our country if they don't do something about it." pic.twitter.com/jxTwiCMoJw

Last year during an interview, Joe Biden said illegal immigrants are a “gift”:

Illegal Aliens are a "gift" according to Joe Biden… pic.twitter.com/49IXcQbveQ

Why are we having a Border Crisis?!!!!! pic.twitter.com/gbrq6w6v6S

(Related: Sen. Cotton On Biden Admin Sending FEMA To Border: “They Are By Their Own Declaration Admitting It’s A Disaster”)

Fact-Checked: Acosta Gets Caught Misinterpreting A Segment Of Trump’s Speech

Rev. Franklin Graham: “There’s Going To Be A Whole Lot More [People] Who Vote For [Trump In 2020] Because He Has Delivered”