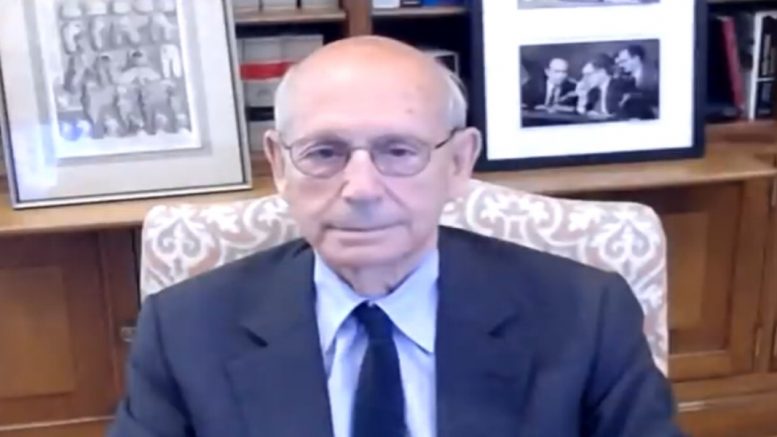 Democrat Justice Stephen Breyer, 82, warned fellow Democrats against “packing” the Supreme Court of the United States as a way to undo the current 6-3 conservative majority.

Breyer, the longest-serving of three Democrat-nominated justices, offered his thoughts a day before Joe Biden, on Friday, issued an Executive Order to form a commission to study reforms to the Supreme Court.

Justice Breyer denounced the idea during a webcast lecture for Harvard Law School on Thursday, saying that it could undermine “the trust that the court has gradually built.”

“What I’m trying to do is to make those whose instincts may favor important structure change or other similar institutional changes such as forms of court packing think long and hard before they embody those changes in law,” Breyer said.

“I hope and expect that the court will retain its authority… which was hard won. But that authority, like the rule of law, depends on trust. A trust that the court is guided by legal principle, not politics. Structural alteration motivated by the perception of political influence can only feed that later perception, further eroding that trust.” Continued Below

Meanwhile, some on the left reacted negatively to Justice Breyer’s comments. Demand Justice, a liberal group dedicated to making the federal courts more left-leaning, called for Justice Breyer to “retire”.

We can't afford to risk Democrats losing control of the Senate before President Biden can follow through on his promise to nominate the first Black woman Supreme Court justice.

It's time for Justice Breyer to announce his retirement. pic.twitter.com/emqZ4Vc1FM

“Breyer, retire,” a billboard truck paid for by Demand Justice, that was driving around Capitol Hill Friday, reads. “Don’t risk your legacy.”

Just had this sent to me: Spotted outside the Supreme Court.

Comes after our Playbook team previewed this am how activists are pushing “Breyer, Retire” and that this truck would be out and about.

Another side of the truck reads, “It’s time for Black woman Supreme Court justice. There’s no time to waste.”

Here's a photo of Demand Justice's billboard truck outside of Union Station. pic.twitter.com/2N1Md9WSiV

White House press secretary Jen Psaki – who used to work for Demand Justice – did not call on liberals to lay off their pressure campaign against Justice Breyer when asked on Friday. She did say, however, that it is up to Breyer to decide when he leaves the bench.

Bongino’s Bold Message To Biden: ‘You Failed – You Are A Total, Epic, Colossal, Apocalyptic Failure’