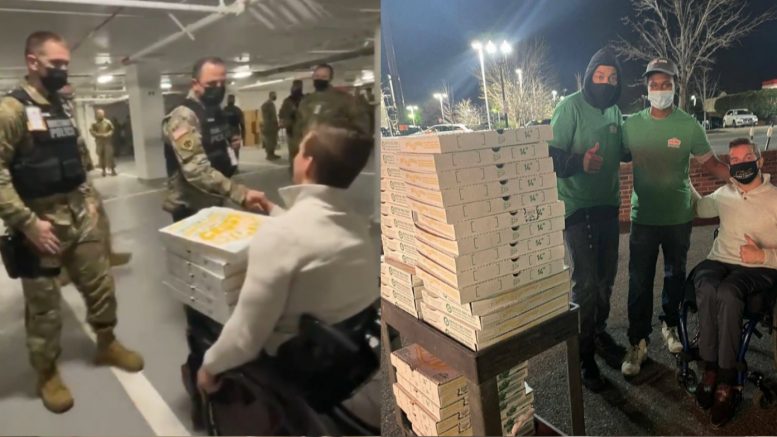 U.S. Congressman Madison Cawthorn (R-NC) took it upon himself to deliver pizza to some of the thousands of soldiers in Washington, D.C. who were forced to take shelter in parking garages.

Over 25,000 U.S. National Guard soldiers have been standing guard and pulling security for two weeks leading up to President Joe Biden’s inauguration and following the January 6th riot at the Capitol building.

Politico reported that “All National Guard troops were told to vacate the Capitol and nearby congressional buildings on Thursday, and to set up mobile command centers outside or in nearby hotels, another Guardsman confirmed. They were told to take their rest breaks during their 12-hour shifts outside and in parking garages, the person said.”

GOP lawmakers took to Twitter and voiced outrage as pictures surfaced to back up the poor treatment of U.S. servicemen and women in the area.

Later on Thursday, Rep. Cawthorn — who is currently the youngest member of Congress — hand-delivered dozens of pizzas in his wheel chair to the troops who were staying in a nearby garage. He then offered for them to take shelter in his office for the night.

The congressman uploaded videos and pictures of his special delivery to the National Guardsmen. See Below

I just visited the solders who have been abandoned & insulted by our leaders. I brought them pizza and told them that they can sleep in my office.

No soldier will ever, ever sleep on a garage floor in the US Capitol while I work in Congress