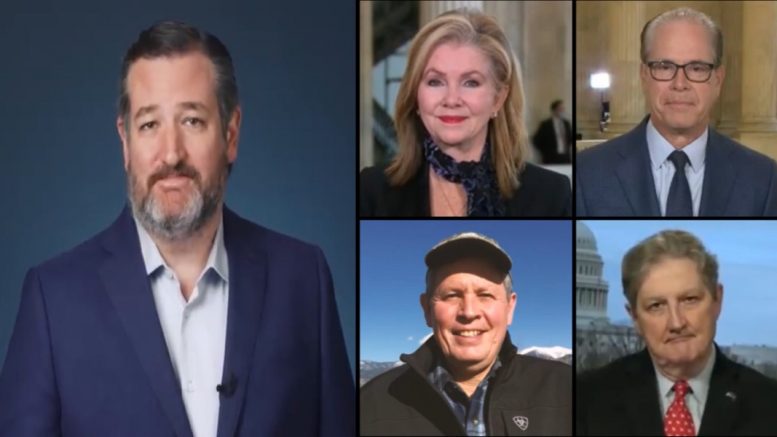 A group of Republican senators led by Senator Ted Cruz (R-TX) have officially announced that they will object to the January 6th certification of the presidential election results on Wednesday unless there is an emergency 10-day audit of the results by an electoral commission.

Senator Cruz and the other senators claim the November 3rd election “featured unprecedented allegations of voter fraud and illegal conduct.”

The Senators’ effort is separate from one announced by Senator Josh Hawley (R-MO) who said this week that he will object to what he claims was the failure of some states — most notably Pennsylvania — to follow their own election laws.

The senators are calling for Congress to appoint a commission to conduct a 10-day emergency audit of the election returns in states where the results are disputed. They cite as precedent the 1877 race between Samuel Tilden and Rutherford Hayes in which there were allegations of fraud in multiple states.

“In 1877, Congress did not ignore those allegations, nor did the media simply dismiss those raising them as radicals trying to undermine democracy,” the lawmakers said in the statement. “Instead, Congress appointed an Electoral Commission — consisting of five Senators, five House Members, and five Supreme Court Justices — to consider and resolve the disputed returns.” Continued Below

“Congress should immediately appoint an Electoral Commission, with full investigatory and fact-finding authority, to conduct an emergency 10-day audit of the election returns in the disputed states,” the Senators said. “Once completed, individual states would evaluate the Commission’s findings and could convene a special legislative session to certify a change in their vote, if needed.

“We should follow that precedent. To wit, Congress should immediately appoint an Electoral Commission, with full investigatory and fact-finding authority, to conduct an emergency 10-day audit of the election returns in the disputed states. Once completed, individual states would evaluate the Commission’s findings and could convene a special legislative session to certify a change in their vote, if needed,” they added.

If that doesn’t happen, the Republican senators intend to vote against certification. Continued Below

“Accordingly, we intend to vote on Jan. 6 to reject the electors from disputed states as not ‘regularly given’ and ‘lawfully certified’ (the statutory requisite), unless and until that emergency 10-day audit is completed,” the GOP Senators stated in their joint statement.

The statement from the GOP Senators is as follows: 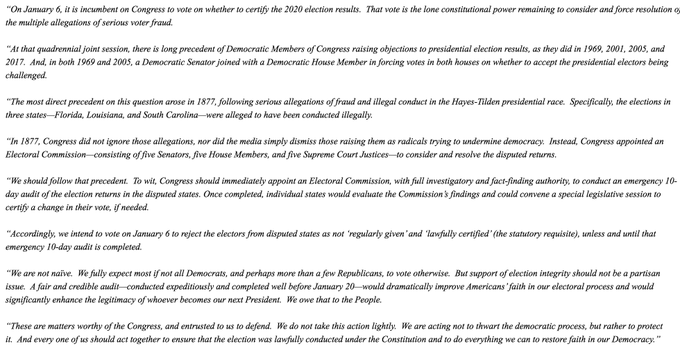 In a separate statement released on Saturday, Senator Marsha Blackburn and Sen.-elect Bill Hagerty released an additional statement, saying, “On behalf of Tennesseans, we are taking a united stand against the tainted electoral results from the recent Presidential election.”

“American democracy relies on the consent of the governed. Allegations of voter fraud, irregularities and unconstitutional actions diminish public confidence in what should be a free, fair and transparent process. Protecting the integrity of the electoral process is paramount to preserving trust and legitimacy in the final outcome. For critical moments like these, the Constitution reserves the right to challenge the Electoral College results to members of Congress. On January 6, we will vote to oppose certification of the 2020 election results,” Sens. Blackburn and Hagerty said. Continued Below

I cannot in good conscience turn a blind eye to the countless allegations of voter fraud in the 2020 presidential election. On January 6, I will vote in favor of objecting to the certification of the electoral college results.https://t.co/khIRQw6YLJ

American voters deserve to know the truth before going to the ballot box. Big tech and the mainstream media colluded to protect Joe Biden and prevent President Trump from putting the American people first.

I believe we need an election commission to review the November 3rd, 2020 presidential election process to restore trust for the American people. My full statement in advance of the Electoral College certification process on January 6, 2021: pic.twitter.com/AMFXysdf95

(Related: Senator Hawley Unleashes A Fiery Statement: “74 Million Americans Are Not Going To Shut Up”)