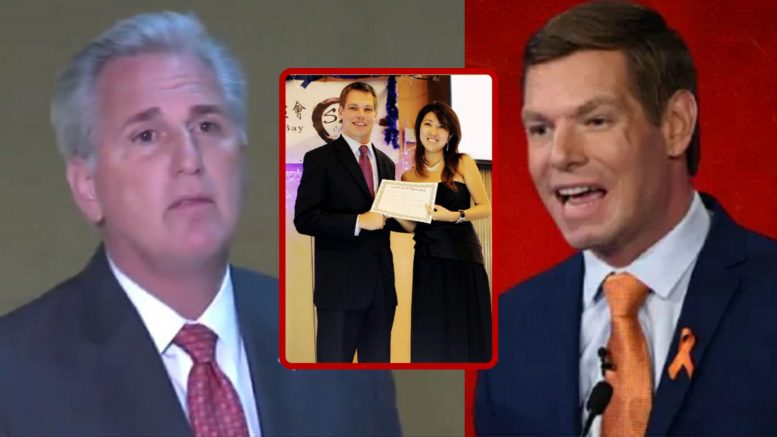 According to The Hill, Rep. McCarthy called for the briefing after a recent report from Axios indicated that alleged spy Christine Fang, or Fang Fang, had ties to a number of political figures including Rep. Swalwell — and had sexual interactions with at least two Midwestern mayors. Swalwell has since repeatedly dodged questions about his history with her.

According to the Axios report, Fang and Swalwell had been linked since his days as a Dublin City, Calif. councilmember, prior to his election to Congress in 2012. According to the report, she had helped fundraise for his 2014 campaign and placed at least one intern in his office.

Investigators reportedly gave Swalwell a defensive briefing in 2015, and he cut ties with Fang soon after.

Following the FBI briefing, Rep. McCarthy told reporters that he is now convinced that Swalwell should no longer be a member of the House Intelligence Committee.

“I don’t talk about what goes on inside there, but it only raised more questions. And the one thing that was fundamentally answered: He should not be on intel,” McCarthy said.

.@GOPLeader on Rep. Eric Swalwell: "He should not be on Intel." pic.twitter.com/ep8X0foYE8

Meanwhile, a source on Capitol Hill confirmed with The Federalist that Rep. Swalwell did, in fact, have a sexual relationship with Fang Fang.

Here is Donald Trump Jr.’s reaction to the latest development:

How is this clown still allowed to sit on the house “intelligence” committee? If this was a Republican they be calling to oust him from Congress. https://t.co/vaJFx1rDqA

Trump Reacts After Jury Finds Sussmann not Guilty of Charge in Durham Probe: ‘Our Legal System is CORRUPT’