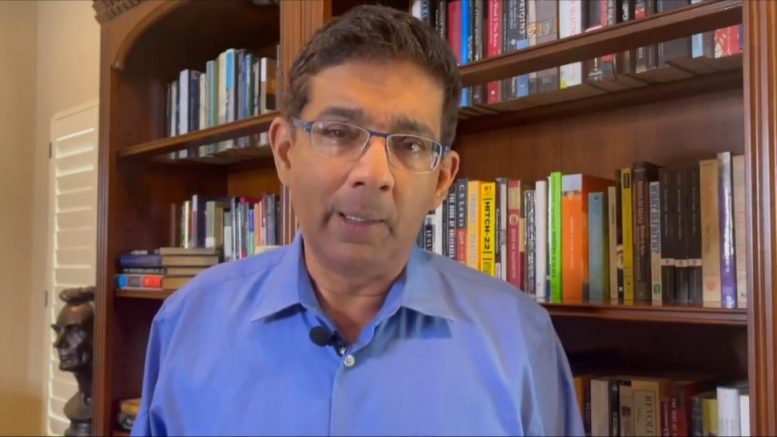 Dinesh D’Souza warned that a new party should not formed by patriots who have grown frustrated with the Republican Party. But instead, he urged that efforts should be taken to “refashion” the GOP in way that will weed out RINOs who serve no benefit. Doing so, according to Dinesh, will ultimately make the Republican Party “leaner, tougher and stronger.”

“Do we need a new party — a Patriots Party — something other than the Republican Party? The answer to that question is a resounding: No,” Dinesh D’Souza said.

“It’s like a party of ungrateful rats that need to be horse-whipped because these are people who have benefitted enormously from the infusion of patriot energy,” Dinesh said. “They’ve benefitted hugely from Trump, who has carried this party on its back, taught it to fight, widened its appeal and its reach, and the Republican Party appears to be such a laggard in defending Trump in this kind of moment in need at this moment of crisis.”

He continued, “It’s understandable, we want a new party. The problem is if you have a third party, you divide the vote. You divide the vote between the Republicans and the Patriot Party, we will likely never win an election again.”

What needs to happen, according to Dinesh, is the Republican Party needs to be held accountable and “refashioned.” This would include keeping RINOs that are already in ‘liberal states,” such as Susan Collins. But then eliminating RINOs who are in deep red states like Utah.

“The RINOs whe need are the moderate or liberal Republicans in liberal statee,” Dinesh said. “A classic example is Susan Collins — we actually need her.” And he cited how Collins voted with Republicans on two out of three key decisions in the past four years, which would have resulted with no votes if a Democrat voted in her place.

“If it were a Democrat, we would have lost all of those votes,” D’Souza said. “So a RINO in a liberal district is always preferable to a Democrat. The RINO will sometimes vote our way. The Democrat will never vote our way.”

“Now, where we don’t need RINOs is in Utah — people like Romney. This is the kind of useless trash that needs to be taken out in the next election,” Dinesh declared. “We don’t need Murkowski in Alaska. These are Republican districts, and so the simple strategy is to run patriots against RINOs in Republican districts. This will infuse more…patriot energy, patriot fire into the Republican party. It makes for a leaner, tougher, stronger party that is up to the challenge posed by the Democrats.” Video Below

We don’t need a new party. We need a reconstructed GOP that knows how to fight. Let me explain… pic.twitter.com/1Ai1I98yEN