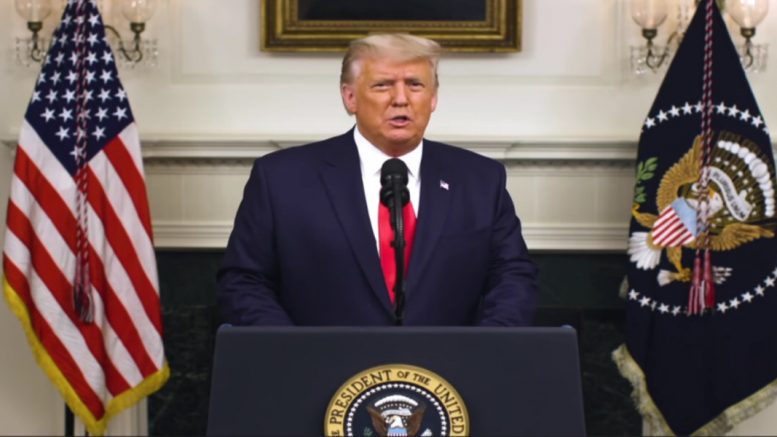 The Trump Campaign filed an election contest Friday in Georgia state court seeking to invalidate the state’s November 3, 2020 presidential election results. Joining President Trump and the Trump campaign in the lawsuit is David Shafer, Chairman of the Georgia Republican Party, who is also a Trump presidential elector, according to a press release from the campaign.

“What was filed today clearly documents that there are literally tens of thousands of illegal votes that were cast, counted, and included in the tabulations the Secretary of State is preparing to certify,” said Ray S. Smith III, lead counsel for the Trump Campaign. “The massive irregularities, mistakes, and potential fraud violate the Georgia Election Code, making it impossible to know with certainty the actual outcome of the presidential race in Georgia.”

According to the Trump campaign press release:

Attached to the complaint are sworn affidavits from dozens of Georgia residents swearing under penalty of perjury to what they witnessed during the election: failure to process and secure the ballots, failure to verify the signatures on absentee ballots, the appearance of mysterious “pristine” absentee ballots not received in official absentee ballot envelopes that were voted almost solely for Joe Biden, failure to allow poll watchers meaningful access to observe the election, among other violations of law.

Data experts also provided sworn testimony in the lawsuit identifying thousands of illegal votes: 2,560 felons; 66,247 underage voters, 2,423 votes from people not registered; 1,043 individuals registered at post office boxes; 4,926 individuals who voted in Georgia after registering in another state; 395 individuals who voted in two states; 15,700 votes from people who moved out of state before the election; 40,279 votes of people who moved without re-registering in their new county; and another 30,000 to 40,000 absentee ballots lacking proper signature matching and verification.

“The Secretary of State has orchestrated the worst excuse for an election in Georgia history,” added Smith. “We are asking the Court to vacate the certification of the presidential election and to order a new statewide election for president. Alternatively, we are asking the Court to enjoin the certification and allow the Georgia legislature to reclaim its duty under the U.S. Constitution to appoint the presidential electors for the state,” Smith concluded. Continued Below

David Shafer, Chairman of the Georgia Republican Party also released a statement on Twitter, writing, “Today President Donald Trump and I filed a lawsuit against @GaSecofState Brad Raffensperger contesting his certification of the Presidential election in Georgia.”

Today President @realDonaldTrump and I filed a lawsuit against @GaSecofState Brad Raffensperger contesting his certification of the Presidential election in Georgia. 1/15 pic.twitter.com/aWnpiz6arf

We show that votes were cast by and counted from individuals who have moved to another state or moved to another county without re-registering as required by law. We are asking the Court to order the audit of absentee signatures matches that [GA Secretary of State] should have ordered weeks ago when first asked. Under Georgia law, we must show that the number of unlawful votes exceeds the purported margin of victory. It does not require us to show for which candidate the unlawful votes were cast.

Georgia officials who have fecklessly asserted that the general election was an “amazing success” “with no credible evidence of irregularity” are undermining public confidence in the integrity of our elections. We will only restore public confidence in our elections by moving to eradicate the systemic unlawfulness that this lawsuit exposes. Every lawful vote must be counted and every unlawful vote rejected. Counting must be done in the open and in accordance with law. Elections officials who violate the law must be held to account. Continued Below

Thankful for the hard working team of lawyers and experts who assembled the evidence. If anyone was wondering what I was doing when [L. Lin Wood] called me out earlier this week for not attending his midday “Stop the Steal” rally, I was helping them prepare this lawsuit.

I have joined this lawsuit in my capacity as a registered voter and Republican candidate for Presidential Elector because I care about the integrity of our elections. I am not seeking reimbursement of my legal fees from the Georgia Republican Party or the Trump campaign.”