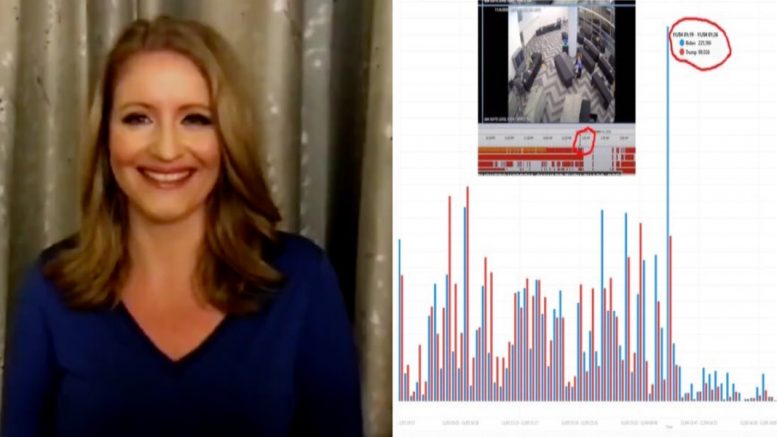 During a hearing Thursday, a volunteer helping the Trump legal team presented evidence of video footage from Atlanta’s State Farm arena to the Georgia Senate Committee, as previous reported by The Freedom Times.

Attorney Jackie Pick showed video of poll workers leaving while four people stayed behind, continuing to count ballots in private. Another video clip also showed what appeared to be suitcases filled with alleged ballots, which were pulled out from under a table.

In another clip, Attorney Pick showed video footage of what appeared to be suitcases filled with alleged ballots, which were pulled out from under a table.

Following Thursday’s hearing in Georgia, a graph showing a spike for Joe Biden in Georgia appeared to match the time stamp (11-4-20) on the suspicious video footage.

Police Commissioner of the New York City Police Department Bernard B. Kerik tweeted a photo of the spike with the timestamp, writing, “This spike is mathematically impossible without cheating”.

This spike is mathematically impossible without cheating, and it coincidently falls within the same timeline that the new ballots were captured. #StopTheSteaI2020 pic.twitter.com/kFlwDMXyrr

Look at this picture from the Georgia video… HUGE SPIKE for Biden during the same time the suitcases of ballots started to be scanned. FRAUD. pic.twitter.com/sIbCL1yrht

Jenna Ellis explained to Fox Business’ Maria Bartiromo on Friday, that the workers “took out four big boxes of ballots and kept scanning them through the night” after election officials “told everyone to go home and stop counting”.

“I don’t think anyone who is honest can look at this video and then all of the evidence that we’ve presented through the testimonies through these very critical witnesses, who are patriots just coming forward, explaining all of the violations of the law that they’ve seen across in these 6 states. And I don’t think any honest person can look at all of this and say, ‘Yeah, this was an honest election that was conducted fairly. There’s nothing to see here, let’s move on'”.

The “Bank Heist” tape changes the result in Georgia.

The State Legislature has no choice but to assume its powers under the US Constitution, article II (1) [2] and select Trump electors.

More important it seems to have the courage to do so.

Nunes On Durham’s Investigation: ‘Hope…He Could Bring Some Type Of Conspiracy Charge’ Against ‘High Level People Within Obama/Biden Administration’