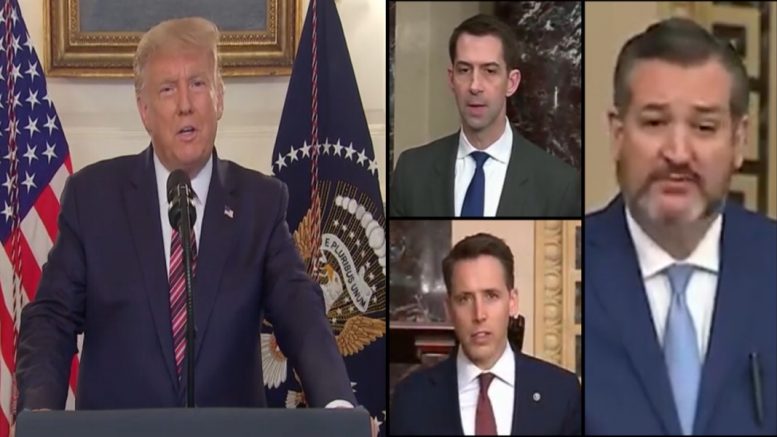 The Commander in Chief on Wednesday, announced 20 new candidates to his list of potential Supreme Court Justices who would likely determine the future of the court and the country.

If given the opportunity to select the next SCOTUS, President Donald Trump unveiled his additions and read off the new nominees during a news conference at the White House.

Speaking from the Diplomatic Reception room of the White House, the president read off a list of names including Republican Senators Ted Cruz of Texas, Tom Cotton of Arkansas and Josh Hawley of Missouri.

The president pointed out in his remarks on Wednesday that Democrat presidential nominee Joe Biden has not yet released a list of his potential picks, likely because, Trump believes the names are too radical and would alter the state of America with decisions impacting the second amendment, free speech, and religious liberty, among others.

“Unfortunately, there is a growing radical left movement that rejects the principle of equal treatment under the law,” the Commander in Chief said. “If this extreme movement is granted a majority on the Supreme Court, it will fundamentally transform America without a single vote of Congress.”

“Radical justices will erase the Second Amendment, silence political speech and require taxpayers to fund extremely late-term abortion,” he stated. “It will give unelected bureaucrats the power to destroy millions of American jobs. They will remove the words under God from the Pledge of Allegiance. They will unilaterally declare the death penalty unconstitutional, even for the most depraved mass murderers.” Continued Below

Justice Ruth Bader Ginsburg is 87; Justice Stephen Breyer is 82; Thomas is 72; and Justice Samuel Alito is 70.

Senator Tom Cotton responded, saying he was honored to be considered:

The Supreme Court could use some more justices who understand the difference between applying the law and making the law, which the Court does when it invents a right to an abortion, infringes on religious freedom, and erodes the Second Amendment.

Senator Ted Cruz said it was an “immense honor” to be considered for the role:

It's humbling and an immense honor to be considered for #SCOTUS.

Read my statement here on @realDonaldTrump’s list of potential Supreme Court nominees he announced today he might choose from in a second term.👇 pic.twitter.com/oOjuCHSs80

After the announcement, Senator Josh Hawley thanked the president but tweeted that he has declined a potential nomination:

I appreciate the President’s confidence in listing me as a potential Supreme Court nominee. But as I told the President, Missourians elected me to fight for them in the Senate, and I have no interest in the high court. I look forward to confirming constitutional conservatives