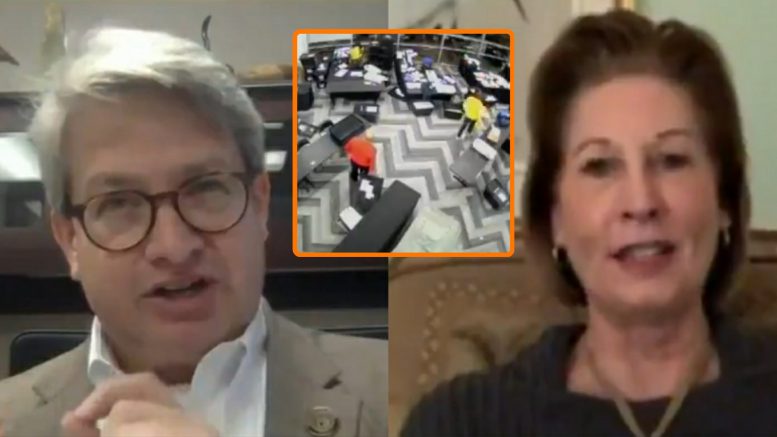 Georgia voting system manager Gabriel Sterling attempted to clear up suspicions stemming from a leaked surveillance tape that appears to show a small group of poll workers running mass amounts of ballots through voting machines after 10:30 PM on election night and into the early hours of November 4th when no observers were present.

The poll workers on the video were seen remaining in the counting room and pulling out mysterious black suitcases from under the drapery of a table after supervisors forced everyone to temporarily leave the site. The workers then rolled the suitcases over to various counting machines, where they look to privately continue the tabulation process.

In one video, one of the workers appears to run a stack of the ballots through the same machine multiple times.

I examined the GA video of those mysterious ballots. Watch the woman in purple. She appears to feed the same ballots through twice!!! It appears she does this three times! There is nothing “normal” about this!!! More at 8ET @newsmax @RudyGiuliani @JennaEllisEsq @realDonaldTrump pic.twitter.com/9f0H78OOte

While Governor Brian Kemp is now calling for a signature audit in wake of the video evidence, election manager Gabriel Sterling thinks there’s absolutely nothing suspicious with what was seen.

“Everything was there. There was nothing new brought in. We didn’t see someone wheeling stuff into the room. We saw stuff that was already in the room the monitors already saw brought in,” Sterling said while interviewing with Newsmax.

He then suggested that it was a combination confusion and exhaustion that led to the poll workers staying behind to count without observers present. “Tired election workers suddenly become the Ocean’s Eleven crew as part of a theft of an election, or is it more likely they were tired and irritated?”

In response to Sterling, attorney Sidney Powell told Newsmax, “Well, there’s no reason to lie to begin to get rid of everyone and pull out ballots out from under a table that run 98% or better for Biden if you’re not committing fraud. You certainly don’t run the same stack of ballots through the machine twice. But, that’s what they do when they want to generate a massive amount of votes — that they already know [accrue] for Biden because they were that way.”

Powell speculated that “pristine ballots” likely came out of the black suitcases, which were described in sworn affidavits as being mass amounts of ballots that were in perfect condition and appeared to have only Biden’s name pre-filled out by a machine.

“It’s such flagrant evidence of fraud throughout this case, they’re sticking it in our faces,” she declared. Video Below