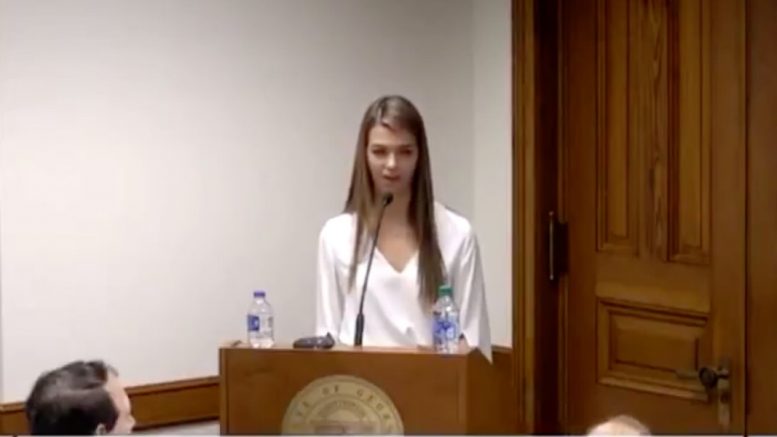 During an election fraud hearing Thursday, a Georgia voter, Grace Lemon, informed the Georgia Senate Committee that she was told by a poll worker she had already voted with an absentee ballot without ever requesting an absentee ballot.

“I went and I voted in person on October 23 with the younger sister, who was a first time voter, and when I went to check in and give them my license and verify my identity to get my voter card, I was told there was an absentee ballot already out for me,” Lemon, a Fulton County resident, told the committee.

“I had to sign an affidavit saying that I did not request an absentee ballot. So, I got my voter card, I voted in person, everything went fine after that,” she continued.

The Georgia voter then explained that the next day her mother called the voter center and was told that somebody had voted absentee in the young woman’s name on October 7.

“We don’t know who that is and we haven’t gotten any answers about that since. And on October 28, I filled out an open records request for the Fulton County voters office. I received an email from Fulton County registration Chief Mr. Ralph Jones. I called him; he asked about my experience and he told me he was going to further investigate the situation and get back to me with more answers,” Lemon said. Video Below

“[On] November 3, his assistant Mariska Votison emailed me to say that my request was given to the secretary of state’s office for further investigation. I haven’t heard anything else from either of them,” Grace Lemon added.

Grace Lemon also told the committee that once she finally got someone on the phone at the secretary of state’s office, “nobody had any answers for me”, adding, “They hadn’t seen my records request, and they had no answers about how the investigation was going. … I never got a call back and at this point I was knowing that I was getting the runaround from everybody.”

“The last line of this email read, ‘This will serve as the final response to this request and your request is now closed.’ We tried to call the secretary of state’s office again and couldn’t get anybody on the phone. I am left with still no answers. No one will answer the phone or call me back. I want to know ultimately if my vote was counted or if the vote that was voted for me, scratched my vote out,” she added.