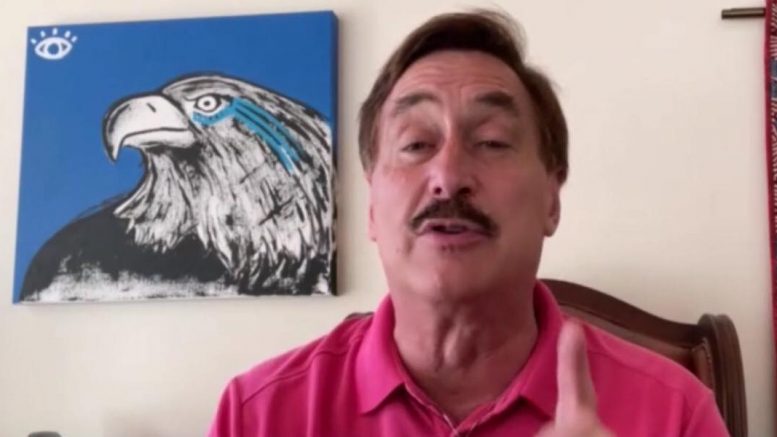 During an interview last week on “War Room”, My Pillow CEO Mike Lindell told host Steve Bannon that he believes the 45th President “will be back in office in August” presumably after presenting evidence to the Supreme Court over alleged foreign election interference.

Bannon pressed Lindell over his alleged evidence and wondered if he has taken it to the “appropriate authorities”, noting that Chris Krebs, former director of cybersecurity who was terminated by former President Donald Trump in December, had claimed that the November 2020 election was “the most secure election in American history”.

“The guy that … said that– that it was the most secure, should be put in prison. We ought to investigate him too,” Mike Lindell said of Chris Krebs.

“What I’m doing right now, all the evidence that we’ve got, that’s gonna be my first and foremost priority, is show all that, get it to the Supreme Court, get this election pulled down. But what I’m doing right now is I hired private investigators. These guys are the best in the world and they cost  a lot. I hired them and they are digging to [find out] who did this. … They are going back in time with Dominion and Smartmatic. … Somebody’s behind all this. I’m spending a lot of resources and we are gonna find out who,” he warned.

“Then we’re gonna take all the criminals and we’ll turn them over to the right people. … If you do work for Dominion, you’re gonna be caught. You’re gonna be caught. All your Brian Kemps and Brad Raffenspergers in the world– you might as well admit stuff now, because believe me, by the time we’re done, every single rat is gonna be brought to justice,” Lindell said.

“When you have an attack as big as the biggest attack in history in cyber warfare, this cyber attack that came in, [it was] one of the biggest crimes against our country in humanity and history. I’ll tell you what: I don’t care if you had a small part, a big part, everyone, every single person is gonna be found out. There’s only one truth,” he said. “… This has affected everybody. Whether you’re a Democrat or a Republican, it doesn’t matter.” Continued Below

“This was a crime to fuel our future forever. That’s what this is. They’re just sealing it for now,” Lindell asserted.

Steve Bannon asked Lindell, “You just made a comment, ‘Get this election pulled down’. When you say, ‘Get this election pulled down’ and you talk about the Supreme Court and go for the Supreme Court, is it your plan and is it your lawyers telling you this … that you will get standing to actually challenge the results of the 2020 election that happened on November 3? Is that the election you hope to get pulled down, or is this to set a foundation and framework for legislation and investigations going forward?”

Lindell explained he has two cases but said that his personal suit is a countersuit against Dominion Voting Systems. Continued Below

“All the evidence that I have, everything is going to go before the Supreme Court, and the election of 2020 is going bye-bye. It was attack by other countries, communism coming in. I don’t know what they’re gonna do after they pull it down,” he said.

“Donald Trump will be back in office in August,” he alleged.

Asked if his lawyers are telling him this, Lindell replied, “The August part is me. Yes, we have enough to get the election pulled down. … These are real lawyers. I have a massive team; this is what I’ve been doing is getting everything ready. And what we’re gonna do … we’re gonna dump six weeks of evidence. … Just keep dumping so everybody can see it.” Video Below

“When it gets to the Supreme Court, if they don’t take, Steve, when everyone in the world has seen what we have … you have to protect us. I’ll tell everybody one more time: There’s not a statute of limitations on a crime of this magnitude of any crime like this,” he continued.

(Related: Mike Lindell Reacts As Dominion Files A $1.3 Billion Lawsuit Against Him: “It’s A Beautiful Day Here For America!”)