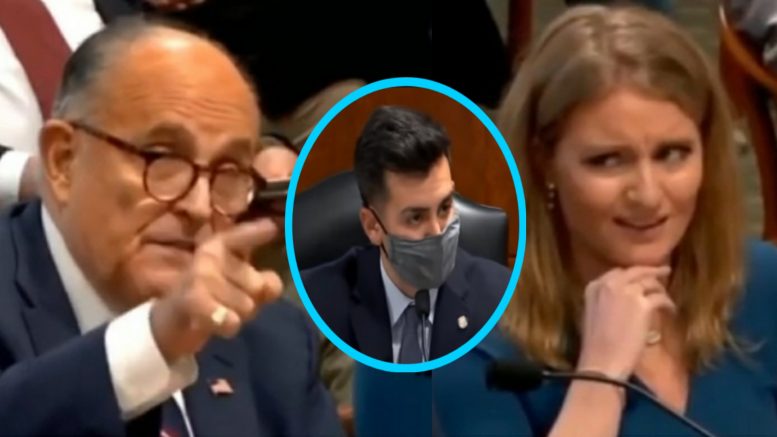 Rudy Giuliani lashed out at a Michigan state representative during an oversight hearing on Wednesday in Lansing, MI.

Rep. Darrin Camilleri (D) set Rudy off when he declared that there is not any evidence of election-related irreguarities alleged by Trump’s legal team, despite mass amounts of signed affidavits that suggest otherwise.

“Why should we sit here in this show that you are partaking in and taking around the country if no one has found any evidence whatsoever of any of your wrongdoing?” Camilleri asked Giuliani after claiming that Trump’s legal team lost 39 court cases to date. “And why should we not believe the reported attempts of you trying to seek a pardon from the President?”

Rudy denied the alleged pardon attempts and demanded that Camilleri get “disciplined” for defamation of character.

He then corrected the representative’s claim that Trump’s legal team lost 39 cases. “Just for the record, we haven’t lost 39 cases. We only brought three. So you’re wrong about that,” Giuliani clarified.

Related Article: MI Witness Fires Back After Dem. Representative Implies She Is Lying About Her Testimony: “You Can Ask Me In The Middle Of The Night & It Would Still Be The Same”

“Second, the reason why people are reaching those conclusions is because of people like you. They don’t have the discipline or maybe the intelligence — I don’t know — to read through this, to read this and to read twenty more like it,” Rudy continued while holding up binder of sworn affidavits. “You can’t tell me there is no evidence when I have a couple of thousand affidavits from people.”

“You can’t tell me that your credibility is better than the credibility of those people,” he proclaimed. “They swore under oath, you didn’t. And you seem very, very free to lie.” Video Below