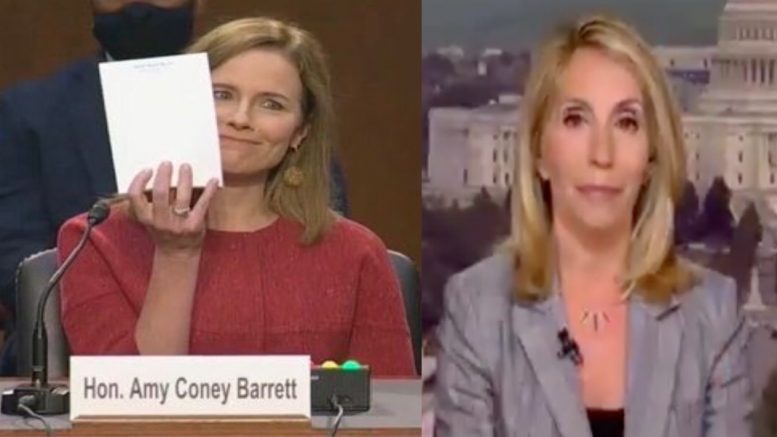 An exchange between Sen. John Cornyn (R-TX) and Supreme Court nominee Amy Coney Barrett, during day two of the Senate Judiciary Committee confirmation hearing, impressed Twitter users and gained praise from CNN’s Dana Bash after Barrett revealed that she was answering lawmakers’ questions Tuesday without a single note in front of her.

Senator Cornyn asked Judge Barrett, “You know most of us have multiple notebooks and books and other things like that in front of us. Can you hold up what you’ve been referring to in answering our questions?”

Judge Amy Coney Barrett responded by holding up a blank notepad and smiled.

“Is there anything on that?” Senator Cornyn wondered.

The back-and-forth sparked an audible laugh in the Senate Judiciary Committee chamber and instant reaction on social media, with several conservative pundits and media figures comparing the episode to Democratic presidential nominee Joe Biden’s use of notes during his first debate with President Trump, The Hill noted. Video Below

CNN’s Dana Bash said, “I think the other thing I will just note, which I think is going to be an instant meme, is that the fact that she had no notes. … It was blank except for except for the United States Senate– kind of stationary that was on it and that’s it.”

“I think that’s gonna be very impressive to Republicans and Democrats, not that everybody didn’t think she was smart, but because she was that confident in how she was going to express herself,” Bash added.

Gorsuch Issues A Scathing Dissenting Opinion As SCOTUS Denies Nevada Church’s Appeal Of COVID-19 Rule: “This Is A Simple Case”