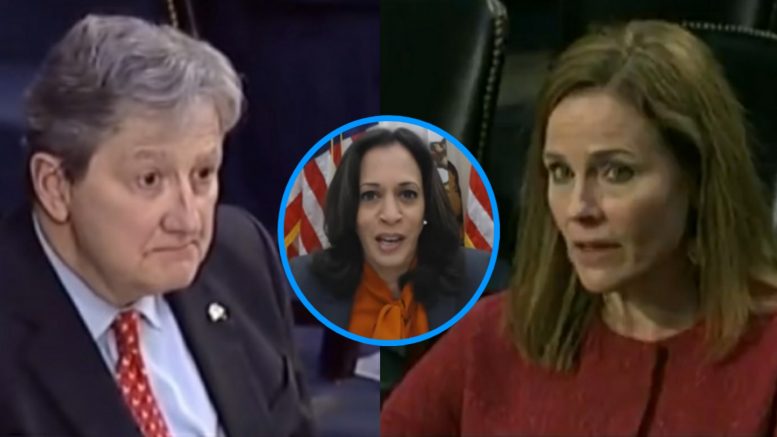 Senator John Kennedy (R-LA) rebuked Sen. Kamala Harris after she implied that Judge Amy Coney Barrett is ‘lying’ in regards to pre-deciding on cases related to abortion and healthcare.

Sen. Harris spent much of her time on Tuesday speculating the impact that Judge Barrett could have on the high court and insinuated that the nominee has already made up her mind on how she will rule on a case involving the Affordable Healthcare Act, which is scheduled to he heard before the high court on November 10.

Judge Barrett said that she “had never made a commitment” and “never had been asked to make a commitment” prior to her nomination; however, Sen. Harris appeared not to believe her.

When given a chance to question Barrett, Sen. Kennedy made mention of Sen. Harris’s exchange and applied it to the oath of office every Justice of the Supreme Court must abide by.

“It says you’ll administer the law in an impartial manner without regards to your personal feelings, doesn’t it? It says you will support and defend the Constitution, doesn’t it?” Sen. Kennedy asked in reference to the oath of the high court. Judge Barrett agreed to both questions.

“Pretty serious oath…Are you going to take that oath and affirm it if you get confirmed?” he questioned. Judge Barrett answered “Yes.”

“You’re not lying?” Kennedy asked, to which Barrett replied, “I’m not lying. I took that oath before I began as a judge of the 7th Circuit and I have not violated that oath, and I would take it again. Oaths are serious.”

“Well, Senator Harris just called you a liar. She said that if you take that oath, you’d be lying that you’ve already made up your mind on how you’re going to vote on some cases, particularly dealing with abortion and the Affordable Care Act. Let’s just cut to the chase. She said you’re a liar. Are you a liar?” Kennedy asked.

Judge Barrett responds to hateful personal attacks: "who are my children who we love, and who we brought home and made part of our family, and accusations like that are cruel”https://t.co/H6Ez7xrA2P pic.twitter.com/6HCd2pqTpr