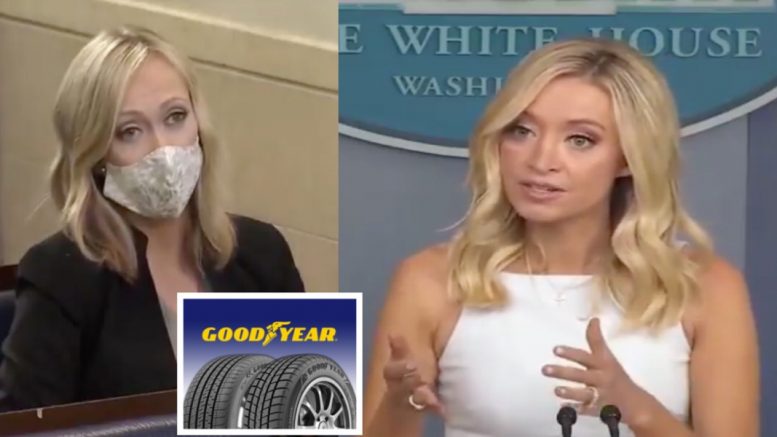 “Don’t buy GOODYEAR TIRES – They announced a BAN ON MAGA HATS. Get better tires for far less! (This is what the Radical Left Democrats do. Two can play the same game, and we have to start playing it now!)”, the Commander in Chief tweeted.

According to the employee who took the photo of the slide, it was presented at the Topeka plant by an area manager and says the slide came from their corporate office out of Akron, Ohio, reported WIBW.

Goodyear spokeswoman Melissa Monaco said in a statement: “Goodyear is committed to fostering an inclusive and respectful workplace where all of our associates can do their best in a spirit of teamwork. As part of this commitment, we do allow our associates to express their support on racial injustice and other equity issues but ask that they refrain from workplace expressions, verbal or otherwise, in support of political campaigning for any candidate or political party as well as other similar forms of advocacy that fall outside the scope of equity issues.” Continued Below

White House press secretary responded to a question from Paula Reid during Wednesday’s briefing over the president’s tweet, shutting down the CBS News White House correspondent.

“Today the president encouraged Americans not to buy Goodyear tires, suggesting they had a ban on MAGA hats. But it appears that their policy is just a ban on political speech. It’s pretty common for most companies. Why is the president retaliating against a private company for dress code potentially jeopardizing American jobs?” Reid asked the White House press secretary.

Kayleigh McEnany responded: “Goodyear needs to come out and clarify their policy. … What happened is there was an image that was put out, that showed certain speech was acceptable– Black Lives Matter, … what was not allowed was Blue Lives Matter, what was not allowed was MAGA hats. What was clearly targeted was a certain ideology. They have not denied that image was presented at one of their facilities and the need to [clarify].”

Reid argued that “racial equality” and “racial justice” is “okay”, but not “political speech”, adding, “That’s pretty standard across the board right now; that’s not that unusual.” Continued Below

McEnany fired back and informed the CBS News reporter that Goodyear “came out and said ‘equity issues'”.

“One of their presidents in New York said ‘We will burn down the system’. We all remember in 2015 the yelling of ‘pigs in a blanket, fry ’em like bacon’. … That speech is allowed, but Blue Lives Matter is not allowed? And I will stand at this podium and say Blue Lives Matter is an equity issue and Goodyear needs to come out and acknowledge that,” she recommended.

According to @goodyear tires, a MAGA shirt is a zero tolerance hate symbol. But Black Lives Matter is allowed. pic.twitter.com/1kWRqSDFQa

.@PressSec defends @realDonaldTrump's call for a boycott of @Goodyear:

"What was not allowed was Blue Lives Matter.

What was not allowed was MAGA hats.

What was clearly targeted was a certain ideology." pic.twitter.com/IwLiF7J3Rn

Meanwhile, Goodyear appeared to backtrack on Wednesday, saying they “always wholeheartedly supported both equality and law enforcement and will continue to do so”.

Yesterday, Goodyear became the focus of a conversation that created some misconceptions about our policies and our company. Goodyear has always wholeheartedly supported both equality and law enforcement and will continue to do so. pic.twitter.com/oO6jUg2rTR