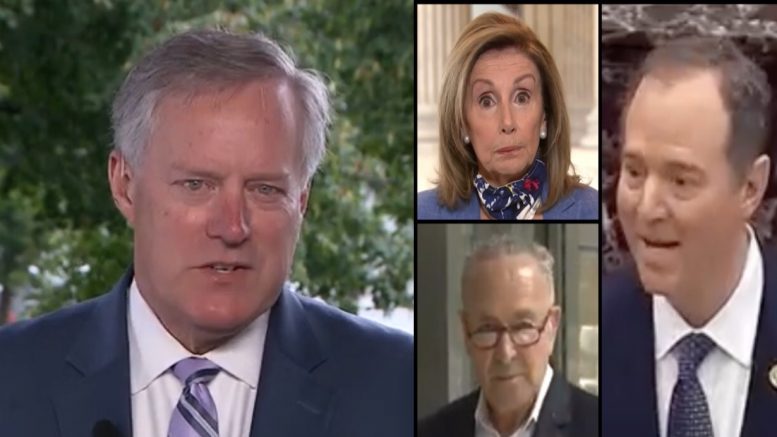 Meadows’ remarks echoed the sentiment of president who tweeted on Wednesday: “IF YOU CAN PROTEST IN PERSON, YOU CAN VOTE IN PERSON!”

The White House chief of staff went on to say, “We see Democrats with this hypocritical point that says somehow we shouldn’t be able to show up at the polling place and cast a vote– that’s just ridiculous.”

Meadows then explained what can be done to ensure the public’s safety and concern to vote. “Give ’em some options where mail in voting– if they request an absentee vote– we want to certainly encourage them. The post office will be ready to deliver those ballots. But we also want to say if you show up in person or you drive up in curbside, you should have the ability to do that.”

Asked about extending the election days to November 2nd and 3rd to give people social distancing if that’s their worry, Meadows responded, “That’s what these secretary of states should be doing.”

“I can tell you in my home state of North Carolina, we have early voting. So there are not really the long lines that you see. You can show up for two are three weeks ahead, show up and actually cast your vote in person. You can request an absentee ballot. Listen, there are plenty of ways to do this, but the secretaries of state need to understand, it’s not the post offices fault. It’s not Donald Trump’s fault. And it’s certainly not the new post master general, who’s only been on the job for less than two months,” he added. Continued Below

Like clockwork, Rep. Adam Schiff (D-CA) pushed the Democratic talking point “vote-by-mail” on Wednesday, appearing to suggest that voting in person is too scary.

Last week, National Institute of Allergy and Infectious Diseases Director Dr. Anthony Fauci said there is “no reason” Americans can’t vote in person for the 2020 presidential election, so long as voters follow proper social distancing guidelines amid the coronavirus pandemic. Video Below

“I think if carefully done, according to the guidelines, there’s no reason that I can see why that not be the case,” Fauci told ABC News’s Deborah Roberts during a National Geographic event that aired Thursday. “For example, you know, when you look at going to a grocery store now in many regions and counties and cities that are doing it correctly, they have X’s every six or more feet.”

“And it says, ‘Don’t leave this spot until the person in front of you left their spot.’ And you can do that, if you go and wear a mask, if you observe the physical distancing, and don’t have a crowded situation, there’s no reason why you shouldn’t be able to do that,” Fauci said. Video Below

Dr. Fauci added that those “compromised physically or otherwise” who do not wish to vote in-person can use mail-in voting. “So there’s no reason why we shouldn’t be able to vote in person or otherwise,” he said.

IF THE PRESIDENT IS ABLE TO VOTE BY MAIL,

ALL AMERICANS SHOULD BE ABLE TO VOTE BY MAIL. https://t.co/aOhH4x5MNp

In April, Schiff took to Twitter to demand “vote by mail everywhere”, claiming “it’s not negotiable”.

“Thousands in Wisconsin are voting at crowded polling places. During a pandemic. Donning facemasks and risking their health. It doesn’t have to be this way,” Rep. Schiff tweeted. “We need to be prepared for easy and secure vote by mail everywhere in November. It’s not negotiable.”

That is why we are fighting back to https://t.co/ImFKSGulau! pic.twitter.com/40b4CRwCEX

(Related: George Stephanopoulos: When Mail-In ‘Votes Are Thrown Out, That Shows That The System Is Working’)