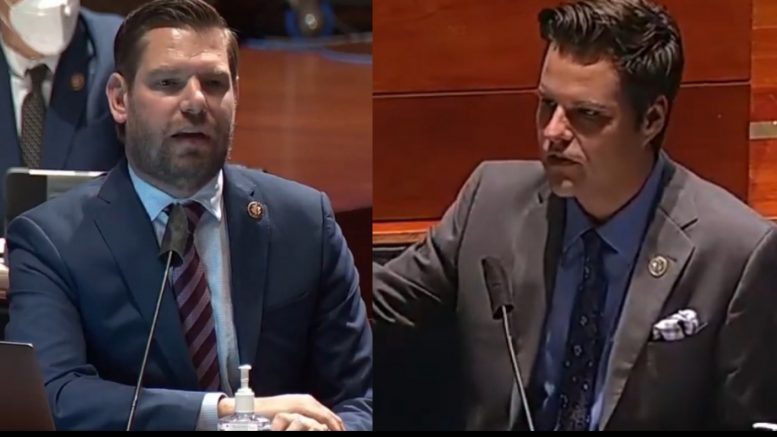 Swalwell used some of his time to speak to question whether or not congressional Republicans believe “black lives matter.”

Related Article: Swalwell Says Dems Have To Beat Trump With An ‘Overwhelming Result’ In Case He Refuses To Leave Office

“Black lives matter,” Swalwell said. “So I would yield to any of my colleagues on the Republican side who can unequivocally say as we calibrate where we are right now that black lives matter.”

Swalwell then cut in to reclaim his time and reiterated his question, “Can anyone on the Republican side say unequivocally black lives matter?”

“Unequivocally, all lives matter,” Gaetz replied. “Why is that a problem to acknowledge?”

Swalwell reclaimed his time again and said, “I think it’s clear that my colleagues on the other side would like to put up a straw man to not have the uncomfortable conversation that we need to have about race.” Video Below

.@RepSwalwell: "Can anyone on the Republican side say unequivocally black lives matter?"

In ending, here is a clip of Gaetz speaking during the House Judiciary Committee’s hearing:

Don't keep the cops in the car. Help them succeed. Help them get better.

The vast, vast majority of police are heroes and work every day to keep us safe.