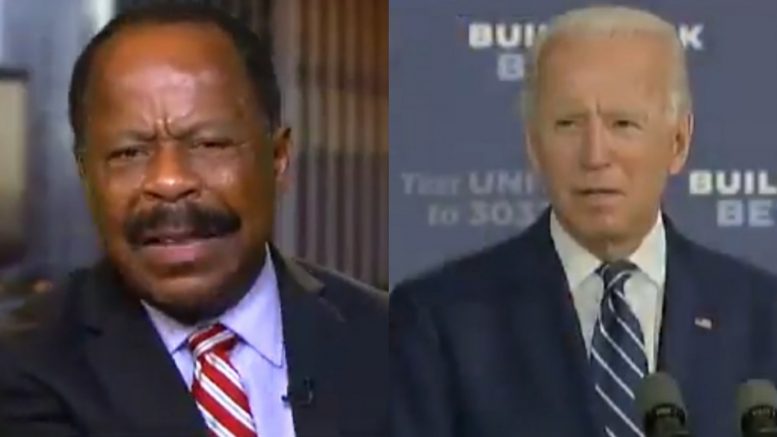 Civil rights attorney and longtime Democrat commentator Leo Terrell had an earful for Joe Biden in regards to the latest controversial remarks made by the former Vice President about the black community.

While addressing the National Association of Black Journalists on Thursday, Biden said that “unlike the African American community, with notable exceptions, the Latino community is an incredibly diverse community.”

While appearing on Saturday’s airing of Justice With Judge Jeanine, Terrell slammed Biden over his remarks, claiming that he “insulted every black American.”  He then blasted political figures such as Al Sharpton and James Clyburn, who constantly keep trying to cover for the presumptive Democratic nominee.

“Joe’s not okay. Joe’s not all there,” Leo asserted. “And Joe has calmed Americans with that, ‘I was Obama’s VP.”

“I left the Democratic Party because I’m voting for Donald Trump for one reason: Donald Trump accomplishes things,” he proclaimed. “I don’t like this ‘feel good, work for you’ type of rhetoric by Joe Biden.”

“The Democratic Party has been totally hijacked by the extremist groups, by Bernie Sanders and the Socialists. That’s not the old Democratic Party. This is a Socialist Democractic Party. Black Americans believe in law and order and they’re going to vote for Donald Trump,” Leo concluded. Video Below

Are Joe Biden’s latest comments a preview of what is to come this November? @CLewandowski_ and @TheLeoTerrell answer this very question. pic.twitter.com/4Hgus8Umpv