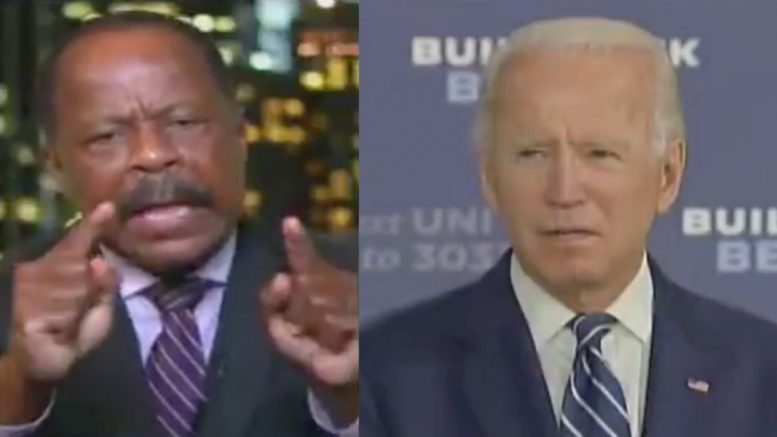 “Joe Biden is unfit to be president and Joe Biden is a racist,” Leo Terrell said on Thursday. “Joe Biden has the mindset of a plantation owner. He thinks he knows how every black person thinks, how we walk, what we should eat. Joe Biden doesn’t understand that black people are individuals. Condoleezza Rice and Al Sharpton are different individuals. We have a different mindset.”

“Donald Trump is absolutely right. Joe Biden insulted every black American today. And he should not be president. He is the racist,” Terrell continued.

“What is so amazing to me is they are going to put this guy out front and say that he is not. The only reason he is getting a pass because he has a D in front of his name, not a R. Republicans are the people who believe in the color-blind society. Democrats are the ones who believe in identity and race politics,” he added. Video Below

.@TheLeoTerrell, who is voting for @realDonaldTrump in November, didn't hold anything back discussing Biden's latest gaffe.

He also told reporters Thursday: “Joe Biden, this morning, totally disparaged and insulted the Black community. What he said is incredible. I don’t know what’s going on with him, it was a very insulting statement he made. … It was great insult to the Black community.” Continued Below

On Friday, the president tweeted: “After yesterday’s statement, Sleepy Joe Biden is no longer worthy of the Black Vote!”

Biden, later Thursday night, attempted to walk back his comments on Twitter from the interview.

“Throughout my career,” he continued, “I’ve witnessed the diversity of thought, background, and sentiment within the African American community. It’s this diversity that makes our workplaces, communities, and country a better place. My commitment to you is this: I will always listen, I will never stop fighting for the African American community and I will never stop fighting for a more equitable future.”

(Related: Leo Terrell Blasts Obama For “Using A House Of Worship, Using A Funeral, To Raise A Democratic Campaign Speech”)

Trump Fires Back After Lindsey Graham Tells Him To Stop Acting ‘Like Obama’: ‘I Think Lindsey Should Focus On Judiciary’